The Alabama Department of Education Monday released annual accountability reports that show Covington County’s three school systems among the more than 62 percent of the systems in the state that this year achieved the goals set by the federal No Child Left Behind Act. 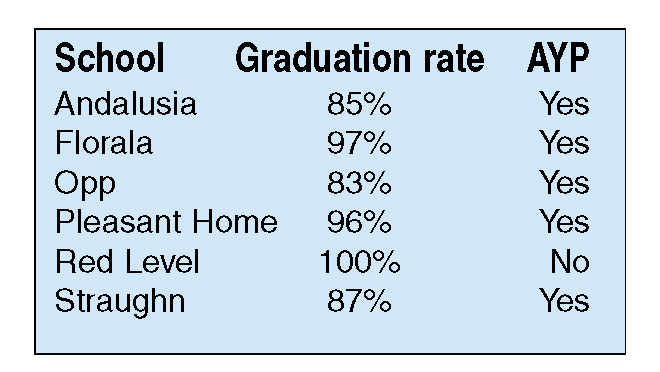 And almost all of the county’s schools were among the 1,033 public schools in the state that met annual yearly progress (AYP) goals.

Only one of the county’s schools, Red Level High School, did not make AYP. RLS had a 100 percent graduation rate; however, its special education subgroup did not meet its proficiency goal, causing the school to miss AYP. It will not fall in to the “school improvement” category.

“In years past, schools had been given a 2 percent flexibility in those totals, and that was removed this year,” Covington County Schools superintendent Terry Holley, speaking of the special education subgroup, said. “We think that by splitting Red Level into an elementary school and high school, that’s going to help that figure tremendously and allow them to rise up to meet those challenges.”

Among the bright notes of the reports was Andalusia High School, which made its AYP goals for the first time in two years.

In order to make AYP, a school must either have a graduation rate of more than 90 percent or show improvement from the previous year’s rate.

“Dr. (Daniel) Shakespeare and his team have done an outstanding job working with the students to implement strategies that included benchmark assessments,” he said. “The teachers and Dr. Shakespeare worked extremely hard and obviously they saw the improvement through the graduation rate.”

Fleeta Junior High School improved its attendance rate to 96 percent 99 percent of the students made AYP. Florala City Middle School, which closed at the end of the 2009-2010 school year, ended on a good note with 100 percent of its students making AYP and an attendance rate of 95 percent.

Opp High School improved its graduation rate from 82 to 83 percent.

“We are also very proud of our schools,” Holley said. “Each one of our schools made AYP, and that’s a great accomplishment. We could not have done it without the help of our students, parents and faculty.”

“We are certainly proud that we met all the standards set by the state for yearly progress,” Watson said. “It is highly anticipated for all school systems and we are no different.”

On the SHS graduation rate, Holley said, “Of course, we’re never going to be satisfied with anything less than 100 percent, but having said that, (SHS) made progress, and all of our schools, we hope, will continue to make progress in that area.”

Holley said schools will continue to utilize “continuous improvement plans,” or CIPs, to do just that.

“We’ll still have to work on our drop-out prevention program, so we can improve those numbers,” he said.