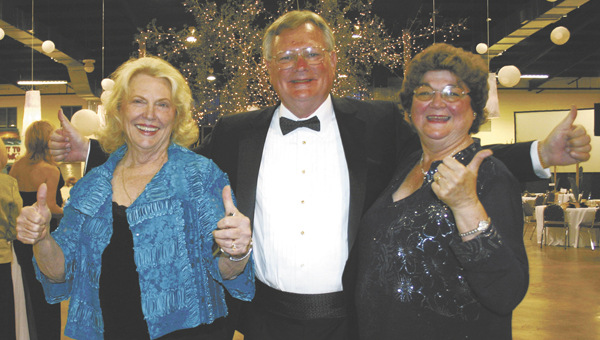 If any of Alabama’s small towns celebrated the Year of Small Towns and Downtowns in a bigger way than Andalusia, the Alabama Department of Tourism doesn’t know about it.

Marilyn Stamps, publications manager for the Alabama Tourism Department, was on hand for some of Thursday ‘s events. Tourism and Relocation Committee member Martha Duggan took Stamps to lunch.

“She said she didn’t think anybody did it quite as big as we did.”

And if no other town matched Andalusia’s efforts for Absolutely Andalusia: Homecoming 2010, the city outdid herself, as well.

“I think it is the absolutely premiere event to occur in Andalusia in my lifetime,” Mayor Earl Johnson said.

“There has never been anything in Andalusia that drew as many people as the air show did,” she said.

Even the weather was perfect. The four-day homecoming event came to pass under beautiful blue skies and in balmy weather.

Jewell Curry chairs the city’s Tourism and Relocation Committee, which was responsible for the homecoming event.

“It was everything and more than we wanted when we started out,” Curry said Monday.

Many of the projects took on lives of their own, she said. Take for example the T&R Committee’s brainstorming about a civic project to be completed for the event.

“We thought we’d do the renovation of the Dream Park,” Curry said. “You know, we thought we’d freshen up, paint it up – and look what happened. Lisa Patterson and Kristy White took over and we got a whole new section added. We never dreamed that much would come of that.”

The committee was trying to think of ways to showcase the city’s most positive points and was considering ways to show off the airport.

“We said, ‘Let’s show off the airport; that’s just a major thing.’ Then someone said, ‘Let’s see if we can have a fly-in.’ We talked to the mayor and got Jed Blackwell on board and look what happened. It’s been that way with everything.”

The T&R Committee asked Paula Sue Duebelt to work on something musical and Sue Bass Wilson to work on the city’s history. In the end, the two collaborated for Andalusia in Revue, the story of Andalusia in story and song which featured more than 200 people.

“After the revue a man who was out there said to me, “Lady, that’s the most bang I ever got for five bucks in my life. You’ve got a lot of talented people here.”

Johnson said he takes no credit for the event’s success.

“I’m in awe of the people who did the work,” he said. It was outstanding. They were outstanding. It goes to show what a small community like Andalusia can accomplish when we believe in ourselves enough to come out and do it.”

“The amount of planning and organizational skills brought to bear on this would have been sufficient to have planned the Normandy invasion,” Johnson quipped.

While he was also awed by the weather, he said, “The weather wouldn’t have helped us if the organizers hadn’t done such a wonderful planning.

Challenge anyone to tell me of any other event, or group of events, in that short period of time.

While Absolutely Andalusia: Homecoming 2010 was a success in that so many people attended, early indications are that it also was a success in terms of the Tourism and Relocation Committee’s overall goals. The events brought thousands of people to town, both the hospitality and retail segments reported good business, and there’s even some talk of relocations.

“I talked with two families that are moving back here,” Duggan, a T&R Committee member and a Realtor, said. One of the families has local ties but never planned to return. This weekend, the were headed home to the Carolinas to list their current property.

“In terms of the long-term reach of this, that’s good,” Duggan said. “When I first got involved in this committee, I learned in a seminar that bringing three families to town was like recruiting a small industry in terms of the economic impact.”

The sentiment was repeated over and over.

“Two or three dozen people said to me, ‘I cannot believe what y’all have done in my hometown,’ ” Johnson said.

The mayor wasn’t alone in giving credit to others.

“It took the whole city to make this good,” Curry said.