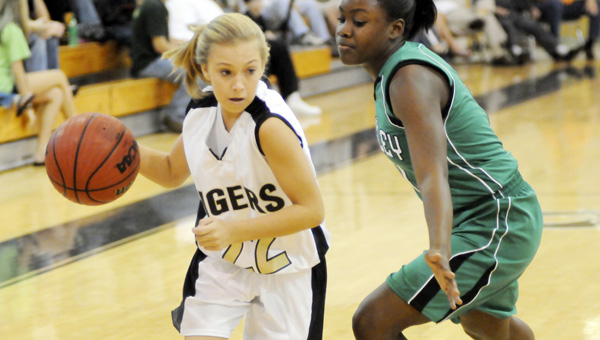 Right out of the gate, the Lady Bulldogs took command of the contest, and sped to a 7-0 early lead in the first period.

Straughn stepped up on defense, but Brantley’s offense was too much as the Lady Bulldogs outscored the Lady Tigers 16-5 in the first period.

SHS girls coach Scott Kinsaul said one thing he can take away from the tournament is that in the future, he will have a good basketball team.

“We’ve got to learn how to handle pressure,” Kinsaul said. “I’m proud of the girls. They hustled. They played hard. Brantley’s a very good basketball team.

“What I’ve got out of this tournament is that I’ve got the chance to have a good basketball team by the end of the year,” he said. “We’ve still got a long way to go, and we’ve got a lot of games left, so it’s good.”

Brantley increased its lead in the second period 23-7 on lazy passes from Straughn that resulted in turnovers.

Trailing 33-9, the Lady Tigers took a time out to regroup, but the Lady Bulldogs came out and executed a 7-0 run taking advantage of their inside play under the net to lead 37-9 late in the second period.

Straughn’s Katy Messick and Jacie Williamson put some life back in their team in the final minutes of the first half. Williamson led in scoring for the Lady Tigers with 14 points. Messick chipped in 13.

Messick shot one three-pointer, one lay up and had a put back on a rebound. Williamson had a break-away lay up to cut Brantley’s lead by 24 points at 44-20 at halftime.

Straughn came out at half time with a burst of energy, but it didn’t last long as Brantley pulled away leading 55-34 at the end of the third period.