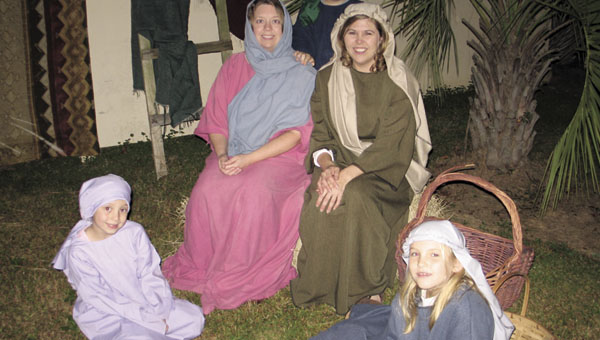 Sophie, Seth and Wendy Donaldson along with Emilee and Angela Patterson get into character for the nativity display in this 2007 file photo, the last time Westview recreated Bethlehem.

He is the reason for the season, and now, those at Opp’s Westview Baptist Church are offering an up-close and personal view of the Baby Jesus and his journey to becoming our Savior as it hosts a “live” Bethlehem Drive on Sat., Dec. 11, and Sun., Dec. 12.

From the comfort of one’s car or church bus, the drive through time back to Bethlehem allows participants to relive the true meaning of Christmas.

“You’ll see the live animals of the time, soldiers, kings, angels, townspeople and the baby Jesus,” said Pastor Scott Ferguson. “It follows Jesus’ life from his birth to the crucifixion.”

“This is a lot of work, but it’s all worth it,” he said. “It takes in the neighborhood of 200-plus people to pull of this production. Pretty much all of them, I’d say 99 percent, are members of the congregation.

“This year, instead of a three-day show, we’re going to do a two-day show, complete with cattle, sheep and chickens for sure,” he said. “The star of the show – the camel – we’re still in negotiations with his agent.”

“We encourage you to come early and remember this is only a two night show,” he said. “In the past, several thousands came through the drive from all over south Alabama.

“We will have signs directing the way, but watch for the Roman guards at the gate, pointing the way,” he said. “The line will proceed along the drive.”

Ferguson said the show is a good way to illustrate the story and meaning behind the Christmas holiday.

“We think that this event is important because we live in a commercialized culture,” he said. “This show reminds us the real reason of Christmas, and we’re doing it in a way that’s casual and laid back – riding in a car. We want people to bring their children, their grandchildren, their church group – you name it. Anyone who sees this will understand what Christmas is really about.”

Opp’s Westview Baptist Church is located on North Main Street, past Mizell Memorial Hospital. There is no charge for admission.

Bell ringers are back