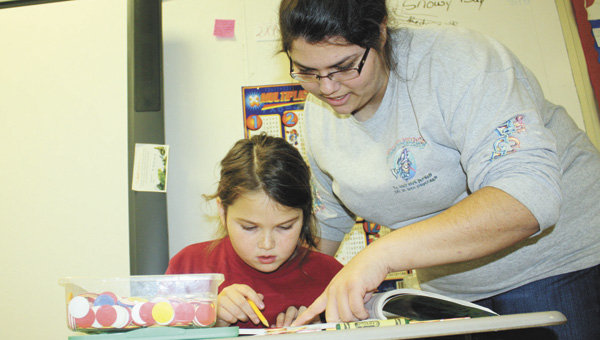 What do an energetic principal, tumbling and football have in common?

They are all things found at Red Level Elementary School’s extended day program.

Principal Rodney Drish has made it his goal to “change mindsets” of the students in the small Covington County town about the importance of going to college.

It was easy to do when in October, he asked Auburn University journalism professor Jennifer Adams to help him introduce children to “the world of college,” so Drish and 100 students traveled to Auburn for the homecoming game.

“The children were treated first class, with a buffet and everything,” he said. “I can’t think Dr. Adams enough.”

The following weekend 100 more students had the opportunity to travel to Troy University for a football game.

The next stop? Hopefully, a University of Alabama basketball game during the spring.

“ I want to expose them to so many universities,” he said. “The more you show them, the more it becomes contagious. A lot of these kids have no college graduates in their families and we want to increase that.”

Since the trips to Auburn and Troy, Drish said he’s seen changes in the students.

“Mindsets have changed, and a lot are saying they are going to college because of the experience,” he said. “I truly believe the seed has to be planted now. We are working to prepare them for the next level.”

While Drish is working on making the idea of going to college stick, a host of faculty, along with high school and college tutors, are making sure the students understand the basics so they can one day earn a college education.

“Thanks to the extended day program, teachers are seeing improvements,” he said. “And a lot of parents are beginning to get on board.”

In fact, nearly 130 students are registered for the program.

Drish said the school is seeing many success stories, including a student who wasn’t performing that well.

“I had a conference with the mother and convinced her to use our extended day program,” he said. “Within weeks the teacher saw a new student. That’s what education is about – winning those battles.”

Homework isn’t the only thing students are brushing up on in the afterschool program, Drish said.

“Our students are learning Spanish,” he said. “And they’ll have the opportunity to showcase what they’ve learned to the community and parents in January at one of our family literacy nights.”