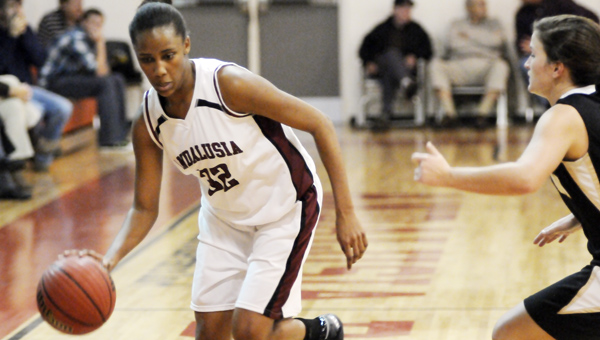 Alexis Horton’s 31 points and her team’s athleticism were the main keys in a 63-33 rout over rival Straughn in area action on Tuesday night.

“Our athleticism was kind of probably the key for us,” AHS girls coach Bennie Shellhouse said about the win. “We run a fast-paced game. We make you tired, and make you make mistakes.”

Andalusia’s 13-0 run in the first period off of a tres by Horton helped the Lady Bulldogs gain the necessary momentum leading into the second period.

Straughn’s Jacie Williamson got her team on the board with a lay up with 3:48 in the first period.

A tres by Katelyn Kinsaul cut into Andalusia’s lead by nine points at 14-5.

The Lady Bulldogs added two more points to end the first period. Straughn cut into Andalusia’s lead again with a sweet inside pass from Kinsaul to Katy Messick for two points.

Turnovers would end up being the vein of Straughn’s game on Tuesday night, as the Lady Bulldogs racked up 19 steals and forced nine turnovers.

In rebounding, Andalusia had 34 total rebounds, and was 13-of-23 from the line.

Andalusia outscored Straughn 21-7 in the second period to take a 37-15 lead at the break.

“Andalusia played well,” SHS girls coach Scott Kinsaul said. “Turnovers killed us, but we’re going to keep working hard and keep getting better. We’ve still got five more area ball games left, and we plan on playing our best in all of them.”

Throughout Tuesday night’s area contest, Andalusia kept its starters in the game, recycling in bench players every now and then.

Shellhouse said he decided to play the game this way to give the starters needed area playing time.

“We want to make sure our starters get a lot of playing time, and we’re trying to get to that point of the season where we’re looking forward toward the future — the playoffs,” Shellhouse said.

Andalusia will continue in area action this Friday night at home against Headland. The girls will start at around 6 p.m. after the B-team.