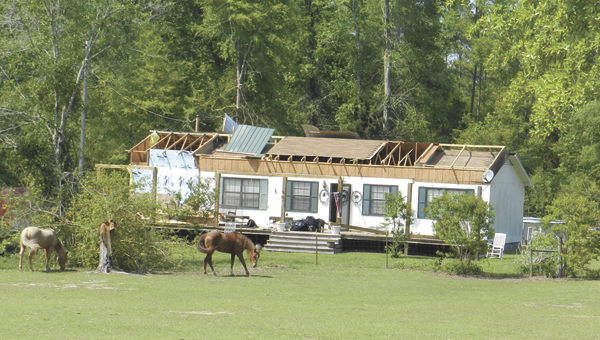 Russell Broussard was out of town when a tornado ripped the top off of his Brooklyn Road home early Saturday. When his sister called to tell him about the storm, he asked her to check on his dog and horses. All three were fine. Broussard said an insurance adjuster visited him on Monday and it’s believed his home can be repaired.

A tornado cut a 14-mile path through Covington County Saturday and completely destroyed two homes, said county EMA director Susan Harris Monday.
The storm system developed late Thursday before roaring through Arkansas, Mississippi, Alabama and Georgia and causing dozens of deaths.
Gov. Robert Bentley has declared the entire state a disaster.
Locally, Harris said 22 houses sustained minor damage, and another five had major damage. Wood-frame homes on Mobley Creek Road and Brooklyn Road were completely destroyed.
“Mobile Weather will be coming in the next day or so to determine how strong the tornado was,” Harris said. “They’ll use the width of the path, the damage done and how long it stayed on the ground to calculate it on the Fujita scale or F-scale.”
Harris said the tornado “skipped” through the county.
“If you look on the map, it shows that the tornado entered the county and hit the first home on Linzey Road. From there, it started doing damage on Brooklyn Road. Then, we have it going across Padgett Road, crossing Creekwood Road, then hitting at the cotton gins on Blake Pruitt Road,” she said.
“Then, it was on to Ala. Hwy. 55 on the South Bypass,” she said. “At the end of the Bypass, it ends. There’s no damage east of that.
“It looks like it never totally hit the ground,” she said. “It skipped a little. If it had hit, there’d been a lot more damage.”
Harris said there were numerous outbuildings, barns and even a chicken house, were damaged. No physical injuries were reported locally.

The Conecuh County Commission Tuesday voted to approve a massive landfill to be located on 5,100 acres near Repton, setting... read more