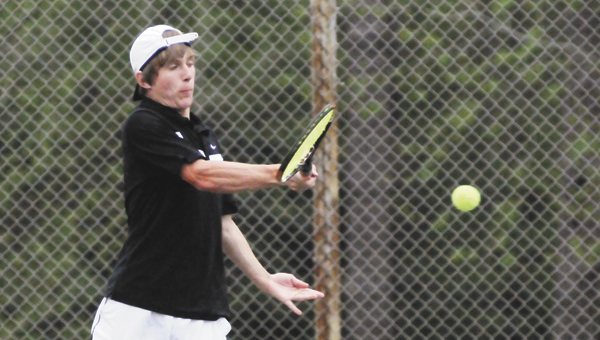 Andalusia’s boys and girls tennis teams have a history when it comes to the state tournament.

The tennis teams left Wednesday for an all too familiar trip to Mobile for the Class 4A state tennis tournament at the Copeland-Cox Tennis Center.

Both teams bring a lot of youth and experience to the tennis center, where they will play against the top tennis teams in their classifications.

“We’re just ready to go,” AHS boys tennis coach Perry Dillard said. “This is kind of an old habit for a lot of them that have been there before.

“They’re just ready to find out who we’re playing and be ready to play,” he said.

Dillard said the coaches had a meeting Wednesday night, where they found out the drawings for the singles and doubles matches. In the drawing, each player will play a different team.

The state tournament is set to begin today at 9 a.m. if the weather permits, Dillard said.

Andalusia’s boys team has compiled a 12-1-1 record leading into the state tournament. The girls team is 11-5.

In last year’s tournament, Mayur Patel, Chris Smith and Jackson Moore finished in the semifinal round of the tournament.

Dillard said usually the same teams compete in the state tournament every year.

“Both teams have young players, but we have some folks that have played in this tournament several times,” he said. “We’ve got some experience. That’s a big plus when you’re playing an event like this.”

AHS girls tennis coach Daniel Bulger said he hopes the girls will play a little longer than they did last year.

“I hope they can build on last year’s experience,” Bulger said. “We could make it to the second round and maybe we can take that, and play a little longer this time.”

In 2010, the girls team never made it past the quarterfinals in singles and doubles.