Faulk: Opp made me 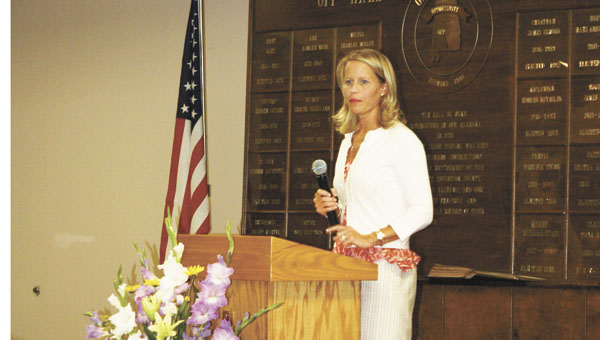 Opp native Nicole Faulk was named Opp’s Own and was the keynote speaker at Thursday night’s Chamber banquet.

Opp native Nicole Faulk grew up thinking the sky was the limit, and it is that mindset that has carried her far into her career as a mechanical engineer.

Faulk, who graduated from Opp in 1991, earned bachelor’s and master’s degrees from Auburn University, and was named Opp’s Own at the 2011 chamber of commerce banquet Thursday night.

Faulk credited the community she grew up in for her successes.

“You shaped me into who I am,” she said. “I’m the fruit of this community.”

Faulk said when she left Opp, she had dreams of becoming an astronaut, but had the opportunity to meeting a high-ranking person in the nuclear field who asked her to come to work with Southern Nuclear, the Southern Company’s nuclear company.

Faulk said the official told her that if she got the opportunity to become an astronaut, they would let her leave because they could use her knowledge.

“I’ve been so enthralled with my career at the Southern Company,” she said.

She has her nuclear regulatory license, which allows her to operate a nuclear power plant.

“I trained with 11 great guys,” she said. “It’s really tough to be a female in a predominately male environment.”

Through her work at Southern Nuclear, Faulk was responsible for “keeping the lights on at Farley Nuclear Plant.”

Faulk said that through her experiences as the senior reactor operator, she and her team trained frequently for disasters such as in Japan.

“These are the first new units built in 30 years,” she said.

Faulk said she got involved because she learned how to ask.

“I wanted to be a part of this program. Luckily, they said ‘yes.’”

Faulk said taking on a job developing a nuclear plant was a big change from what she was used to doing.

“There was no instructions,” she said. “I had followed the rules for six years while at Farley. But there were no instructions because no one has done this for 30 years.”

Faulk is actively involved in the Vogtle Project, where they are in the early phase of preconstruction of two new units. Two units already there have been generating nuclear power since 1987 and 1989.

The foundation site is 90-feet wide and five football fields long, and they are currently building the world’s largest crane to help with the construction.

“It’s an amazing structure,” she said.

In addition, the chamber honored:

• Eddie and Lorrie Kilcrease as the farm family of the year;

• Denise Johnson Pearce as the teacher of the year. Pearce has been a math teacher at Opp High School for 21 years;

• Bill Pugh as the spirit of opportunity. Pugh opened Covington Jewelers in 1953;

• Cammie Grace Weaver and Justin Ferguson as Christian athletes of the year;

• Hubert T. Sullivan was inducted into the Hall of Fame.

If it weren’t for Dr. Charles Tomberlin, Mike Broussard wouldn’t be a name synonymous with the Andalusia Regional Hospital radiology... read more