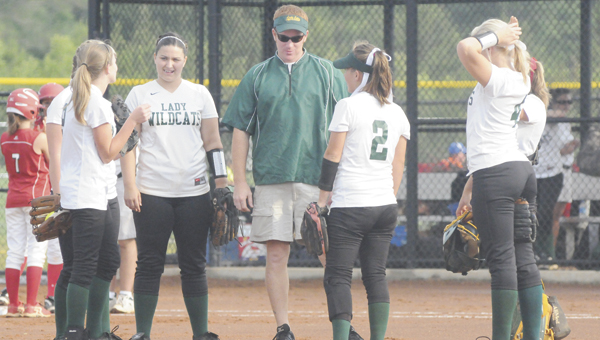 Florala head softball coach Jonathan Stinson (center) calls a meeting at the mound during the first game against Pleasant Home.

GULF SHORES — Florala bounced back from a 12-0 game one loss to Pleasant Home, and beat Georgiana 15-0 in three innings to stay alive in the Alabama High School Athletic Association’s Class 1A South Regional Softball Tournament at the Gulf Shores Sportsplex Friday.

“They weren’t there,” he said. “All of the mental toughness drills we did all week just didn’t show in that first game.”

Florala will play Sweet Water today at 8 a.m. in the second game of the loser’s bracket.

Starting one game for Florala was history in the making, and the Lady Wildcats’ win over Georgiana signified the school’s first win in the post season for the softball program.

“It’s good to get a win,” Stinson said. “We didn’t come down here to lose two games. We‘d like to get a couple more (today), and see what happens.

“That (win) helped the confidence a litle bit,” he said. “Maybe we can show up and surprise somebody a little bit (today).”

Tigers bow out of playoffs