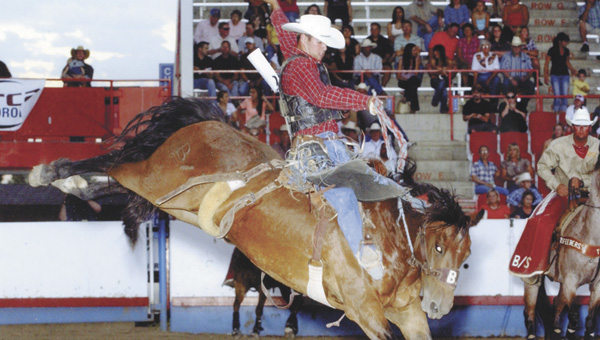 Justin Caylor of Opp will compete in the College National Finals Rodeo next week. | Courtesy photo

For Justin Caylor, life is a wild ride – literally.

Since he was 16, the Babbie native and recent The University of West Alabama graduate has used his rodeo skills to score countless buckles, prizes and even a college education. Now, he will represent the university in the College National Finals Rodeo June 13-19 in Casper, Wyo.

This is Caylor’s third qualification in saddle bronc riding, where he has a shot to win National Intercollegiate Rodeo Association titles and scholarships.

“I’ve been riding since I was 16,” Caylor said. “My parents said even when I was real little I wanted to, but they wanted me to rope not ride bulls and bucking horses. That’s what I wanted do.”

Caylor said the adrenaline rush he gets every time he’s in the saddle keeps him coming back for more.

“It’s just fun to me,” he said. “If you get on a good horse and make a good ride, it’s smooth and easy and a huge adrenaline rush.”

Caylor said the key to a good ride is being relaxed.

“If you’re nervous, you’ll freeze up and not make the moves you need to stay on,” he said. “In my case, I’ve done it for so long, I’m pretty relaxed, and I got it down.”

Now that college is over, Caylor, who has a degree in sports management, said he plans to rodeo professionally, and maybe, one day, become a rodeo coach at a university.

“In professional rodeo, you go everywhere,” he said. “I’ve been pro-rodeoing the past three or four years. I’ve been to Wyoming, Montana, everywhere. There are 700 rodeos held a year. You pick which ones you want to go to. If you place, you can win pretty good. The top ranked guys can make $200,000 plus.”

Caylor is the son of Kenny and Leigh Caylor. He is a 2006 graduate of Opp High School.