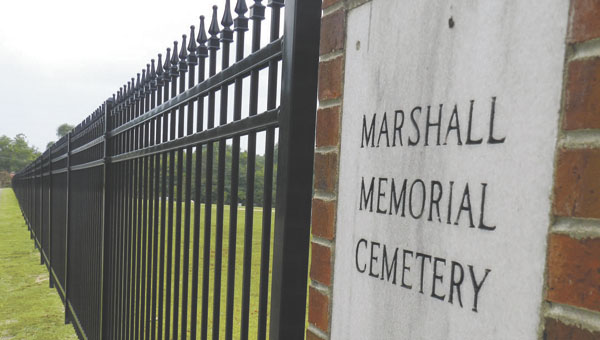 Six hundred feet of decorative fencing has been installed in Marshall Cemetery, and similar fencing will begin going up in Andalusia Memorial Cemetery Monday.

Director of Leisure Services Dwight Mikel told the Andalusia City Council this week that the cemetery enhancement project is coming along nicely.

Earlier this year, with the help of area youth participating in a Disciple Now weekend program, new landscaping was installed in both cemeteries. Despite the drought, the plants seem to be flourishing, thanks to irrigation systems also installed.

“The landscaping looks good,” Mikel said. “It got settled prior to the drought.”

“By the end of the year, it should be right where we want it to be,” he said.

Mikel said city workers also have met with the principles of businesses who do work in the cemeteries, including vault and monument companies and funeral homes.

Mikel said resurfacing work has been completed in both cemeteries and sod work also is under way.

New parking lots at Johnson Park will mean players and parents won’t have to cross through traffic to reach playing... read more