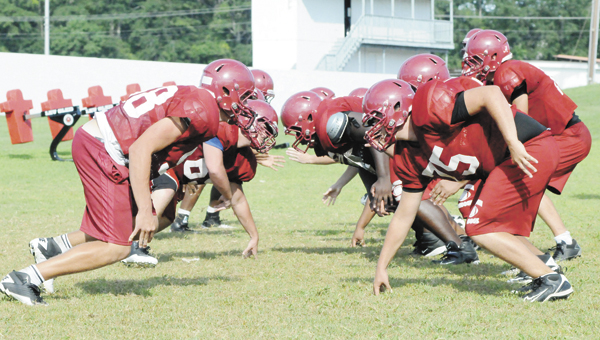 It may take two to tango, but Andalusia head football coach Brian Seymore said Thursday that it’s going to take a good defensive effort from his Bulldogs to stop Carroll-Ozark tonight in the season-opener.

“(Broome) loves to run the ball inside the tackles,” Seymore said. “(Guice) is their best receiver. We’ve got to make sure we do a good job containing him (Guice) and keeping him off the edge.

“The biggest threat they’ve got is Anthony Baker,” he said. “He’s a tall 6’5″ type receiver. They throw a lot of balls up to him and he’ll catch them.”

Last week, the Bulldogs ended their jamboree game with Class 3A Luverne in a 20-20 tie.

Seymore said the main problem was the fact that the team gave up too many big plays, and added that on defense, the game plan is solid.

“Defensively, we’ve got a good game plan in,” he said. “We’ve got to recognize the different formations and recognize where their athletes are at. They’re going to try and get the ball to those three guys.”

Andalusia senior quarterback C.P. Rogers will get the starting role for the Bulldogs tonight against the Eagles. Sophomore quarterback Michael McCalman will get some playing time as well, Seymore said.

“We’re definitely going to try and continue to use two quarterbacks,” he said. “We’ll be a lot more multiple than we were last week formation-wise and play-wise. We’re going to get a lot more offense in. We’ll open it up a little bit more.”

Right now, going into week one of the regular season, Seymore said the team’s main concern is Andalusia.

“There’s no disrespect to Carroll,” Seymore said about the game. “We’ve got to take care of ourselves right now. I think we’re going to dictate how we play (tonight). I hope our kids go out there and play with a lot of intensity and focus.”

Andalusia will have junior linebackers Ethan Jones and Eric Dorsey, along with Lakelyus “Fathead” Adams in the secondary to lead the Bulldogs’ defense tonight against the Carroll three.

Before last week’s jamboree game, Seymore said the team will treat the game as if it were its “first” game of the season to get ready for the “second” (tonight’s) game.

When asked if his team is ready and prepared for the “second” week, Seymore said it’s just like any other week.

“You never feel like you’re really prepared,” he said. “We’ve had a good week at practice. You always want to start the year off with a win.

“It’s like a stepping stone for what we want to try and accomplish,” he said. “We want to get through this game, and get our kids mentally and physcially ready for the start of region play next week in Montgomery against Alabama Christian, and in the end, the goal is to play to the best of our ability through all three phases of the game — offense, defense and special teams.”

But what’s the best thing about tonight is that it’s the beginning of something much more “exciting,” Seymore said.

“I know everybody in the community is excited to open the football season,” Seymore said. “A lot of hard work went into this point. It doesn’t get much better than the opening night of Friday night football in Alabama.”

Kick off in Andalusia is at 7 p.m.