Wildcats getting tuned for Georgiana 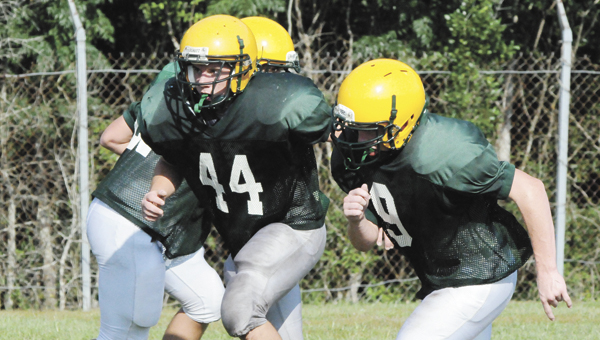 The Wildcats will face Georgiana for their first region contest this Friday night at home. | Andrew Garner/Star-News

With the first regular season under the Florala Wildcats’ belt, head football coach Justin Jones said his team is still learning “how to compete” on the field.

The Wildcats are coming off a 34-8 loss to Samson, and will face Georgiana — a team they beat for their only win in 2010 — to kick off their region play.

Florala trailed 14-0 at half time, and Jones said the team had opportunities to score.

“We just could not punch it in,” Jones said. “(Samson) had one long run, one lung pass and kickoff return and that was the difference in the ball game.

“Hopefully, we’ll continue to work hard and learn how to compete and play four quarters,” he said.

Florala will face a Panthers team that is coming off a 50-20 season-opening loss to Luverne, a Class 3A school.

Not giving up the big plays is on the list of things no to do this Friday night for the Wildcats, Jones said.

“They’ve got some good skill kids,” Jones said. “Our job will be trying to hem them up, and staying in front of them.

“Offensively, we just want to do what we want to do. We just want to control the football and move the chain and see where that’ll take us,” he said. “I don’t think there’s any doubt that to live for another down. We have to try as much as possible to prevent the big play — keeping them off the field. The No. 1 key on defense is to help us have the ball for the longest time.”

Jones said the players know how important this week can be for their season.

“We all have to understand that this week is very important,” Jones said. “It’s very important for the overall picture of where we want to be (at the end of the season).

“Last week — that was a tough loss,” he said. “We wanted to play a physical team, and Samson was a physical football team.”