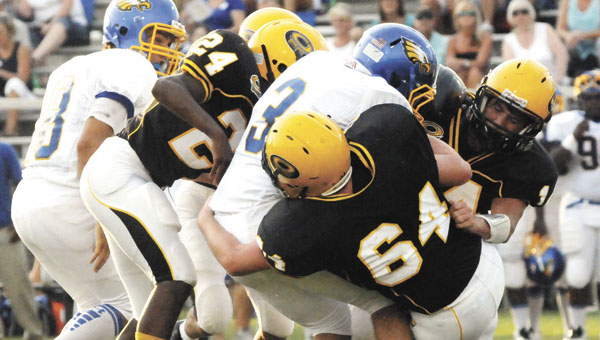 After enduring a tough 20-14 loss to Elba last week, the Opp Bobcats have responded well at practice this week as they get ready to open region play against Daleville this Friday night, head football coach Jack Whigham said.

“They know they played a good ball game (against Elba),” Whigham said. “We were 100 percent better than in the preseason game. Elba has an outstanding team.

“We knew we were going to have to play really, really well,” he said. “They converted two big plays in the game, and that was the difference. We just didn’t move the ball in the second half.”

The Bobcats held a 14-0 advantage at half time last week, and the Tigers rallied in the second half for the win.

Whigham said the players know if mistakes are eliminated, then they’ll have a chance at winning a few games.

This week, the Bobcats defense will be up against Daleville senior running back Brandon Burks, who had a stellar performance last week against Bullock County.

Burks rushed for 411 yards and scored seven touchdowns in his team’s 53-23 win over the Hornets. Burks would’ve had nine touchdowns, but two got called back due to penalties.

“He’s an outstanding running back,” Whigham said. “What makes him so dangerous is that he can change directions so much faster than others. We’re going to have to do a good job of running to the ball. We have to keep our shoulders square, and bend our knees and hips.

“If we miss tackles, then he’ll go the distance,” he said.

This week at practice, the Bobcats have worked on open-space drills on defense, Whigham said.

“We’ve gone over a lot of open field tackling and a lot of tackling in tight spaces,” he said. “You’ve got to practice running to the ball, and if you do those things, then you’ll have a chance (at stopping the run).”

Getting a win this week to kick off their region play would be big, Whigham said.

“It’s very important to start the region on a good note,” Whigham said. “One loss won’t eliminate you, but obviously we’d like to win. We’re going to have to play really, really well to do it.”

Kick off in Daleville is at 7 p.m.