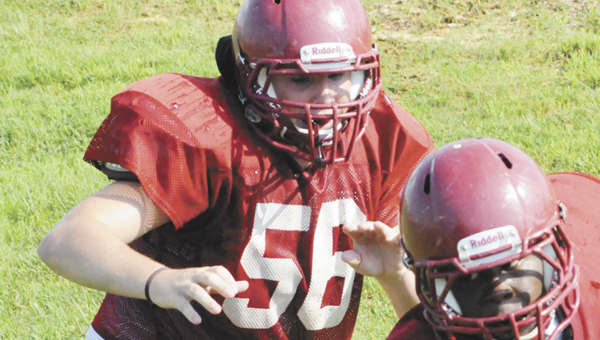 Andalusia’s Tyler Raines (56) will take over the long-snapping duties this week as the Bulldogs travel to play ACA. | Andrew Garner/Star-News

The No. 1 goal this week for Andalusia is to enter tonight’s region contest against Alabama Christian Academy as a “focused” and ready football team, head coach Brian Seymore said.

“We want to come out of the locker room focused, and maybe get some of those nerves behind us,” Seymore said. “We were a little nervous at the first game of the year (last week).

“We had a chance to make some adjustments and finally settled down, and I felt like for the most part, we took control of the game,” he said.

Last week, the Eagles beat Elmore County, another Class 4A team, by a thin margin at 22-20.

“I think (Mote’s) done a good job over there,” Seymore said. “Offensively, they’re very multiple. They use various formations, shifts and motions.

“They try to move Danny Madison,” he said. “He’s an all-around player for them. He’s a good athlete, and he’s real elusive and hard to tackle.”

Seymore said the key to stop Madison is making sure the defense is in its right spot on the field.

“It’s just getting our defense lined up and playing sound fundamental football and that includes lining up and tackling well,” he said. “If we line up and tackle well, I think we’ll be fine.”

In last week’s win against Carroll-Ozark, Andalusia’s Michael McCalman led the Bulldogs in rushing with 169 yards at quarterback.

Seymore said McCalman will start at QB this week for Andalusia, and will use back up C.P. Rogers in the game some as well.

As far as the Bulldogs’ offense, Seymore said he wants to continue from where the team left off last week, where the ball was rushed for 369 yards.

“I thought we moved the ball really well on the ground,” he said. “I’d love to get settled down and spread the field more and throw the ball more. That’s something we’ve worked real hard on this week at practice.”

Kick off in Montgomery tonight is at 7.

Whether Andalusia senior linebacker and tail back Jacard Townsend, who sprained his ankle last week, will play will be a game-time decision tonight, Seymore said.

“He has practiced the last two days,” Seymore said. “I don’t want to rush anything with his ankle. We want to make sure he’s totally healthy when he returns. We’ll evaluate him (today) in pregame. If he can play, then we’ll definitely get him in there.”

Brandon Smith, long snapper and punt snapper for the Bulldogs, has a possible tear on his medial collateral ligament (MCL). Smith will not play in tonight’s game, Seymore said.

Alabama junior linebacker Nico Johnson said that the team will focus on establishing its identity this week in its opener... read more