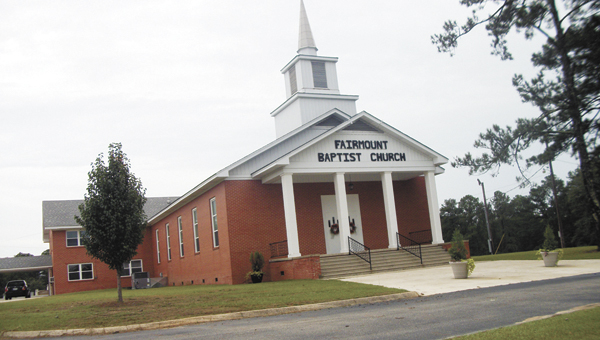 Today, the church is growing, has a new pastor, John Bell, who began his tenure at the beginning of the year, and has much to celebrate with a focus on reaching out to the community, Williamson said.

“We have an active WMU, which is working with local children in helping them with clothes,” she said. “We have incorporated it into the whole church.”

Additionally, church members reach out to shut-ins by giving a kind word and seeing if they need anything.

Attendance is averaging 90 each week, and growing children’s ministry and youth ministry with services are available to them Sunday morning, Sunday night and Wednesday night.

“We are trying to reach everyone,” Williamson said. “It’s not just keeping Jesus’ love in these four walls.

“We don’t believe the love of Jesus is just something to share here,” she said. “I think that’s helping us grow.”

The church was founded in 1821 and is believed to be the oldest church in Covington County, she said.

The land the church sits on only cost $5.05 for the 40 acres when the church was built, she said. The church still has the original bill of sale.

According to church records, the first church was used as a place of worship, but was also a fortress against Native Americans.

Since there are no written records for the first 50 years, Williamson said the reason for the fortress is unknown.

The second church was built during Reconstruction, and written records began in 1870, she said.

In 1927, a communitywide tent revival was held at Fairmount, and pictures from the revival show a tremendous crowd.

Before construction began on the fourth building, the church collected bricks rather than money. They held a groundbreaking in May 1958.

Williamson said they used material from the old building and all labor was donated to the church.

The last service was held in the third building in March 1959. Until the new building was completed in 1964, church members held services in the fellowship hall and inside the walls of the new church once they were erected.

When the new and current building was completed, the church was debt free, with the exception of a few accounts for monthly supplies, Williamson said.

The cemetery at the church has many older graves, including that of Clinton’s great-grandfather, James M. Cassady, and Flying Tiger Ben Crum Foshee.

Other facts Williamson said are interesting, include:

• The church’s first name was called Baptist Church of Christ at Fairmount;

• Each of the four church buildings has had some of the original timber passed on through its forerunners;

• In 1890, a committee was appointed to secure a desk. The desk, as well as other items from the second building, are still used today.