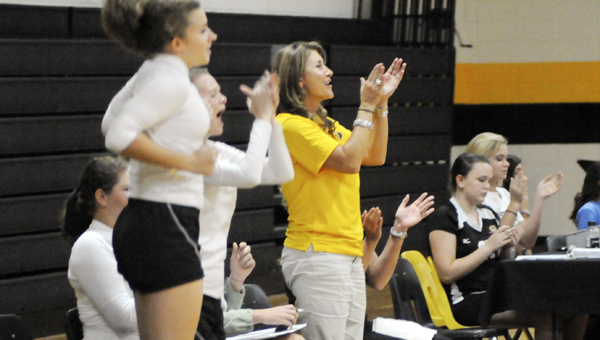 Opp dialed up its serving game Thursday night, and the Lady Bobcats walked away with a 3-2 area victory over Geneva at OHS.

“It feels pretty good,” OHS volleyball coach Christie Spurlin said about getting the win. “It helps the girls with their confidence, and helps the realize that maybe we can beat them in the area (tournament), too.”

The Lady Bobcats were in sole control of the match from the beginning, but the Lady Panthers bounced back to tie the game after the second and fourth games to force a game five.

Spurlin said this win was big for her girls because the Lady Panthers beat the Lady Bobcats 3-2 in earlier regular season area action.

In Class 3A, Area 2, Opp and Geneva are currently tied for the No. 1 seed, who will end up hosting the area tournament, which will be Tues., Oct. 11.

Spurlin said more than likely, there will be a coin toss to determine who the top seed is in the area.

When it came down to the match Thursday night, Spurlin said “serving” was the difference in the win.

“That’s the main thing is serves,” she said. “I told them that serves can win a game for you.”

The Lady Bobcats and Lady Panthers traded points back and forth in the first game. Trailing 20-15, Geneva took a time out to regroup.

The Lady Panthers trailed during the second game, but never gave up, coming back from a 16-10 deficit at the mid-point to tie the game 20-20 late.

Opp had the ball in hand in the fourth game, but the Lady Panthers’ persistence won out, coming from behind for the win.

The Lady Bobcats closed the winning game out taking a healthy 13-11 lead to the finish line.

Next week, the Lady Bobcats will be back in action against Zion Chapel on Monday and at Pleasant Home on Thursday.