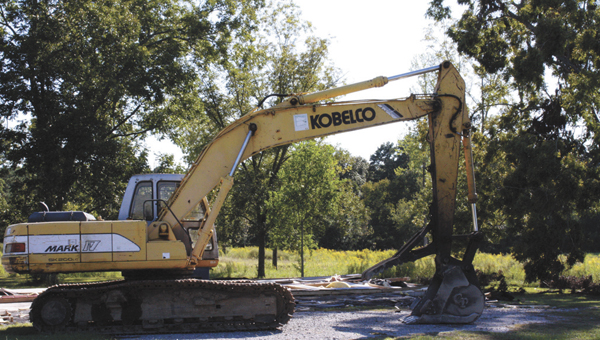 Work has begun on the proposed site for the J.M. Jackson dealership in Sanford.

Mayor Sonny Thomasson called the soon-to-be-constructed J.M. Jackson dealership the “best thing ever to happen” for the town of Sanford.

Sanford, which boasted a population of 241 residents at the last Census count, is situated along one of the busiest traffic corridors in the state – U.S. Hwy. 84. A two-year-old Department of Transportation report put the daily traffic count at 9,000, Thomasson said.

Last month, the town council approved an agreement that will allow J.M. Jackson to construct a $2.5 million car dealership and service center. Johnny Jackson, owner of J.M. Jackson Buick Chevrolet, said then he hoped to begin “turning dirt” at the 6-acre site located across from the South Alabama Regional Airport as soon as the paperwork was signed.

By yesterday, evidence of the project’s progress could be seen from the roadway. One home and two out buildings were in various stages of demolition.

Thomasson said the town has not received word of a signed contract between corporate officials and property owners, but he was excited to see “movement” at the site.

“We don’t have much business in Sanford,” he said. “The dealership will be the largest business, and just the first of, what we hope are other, businesses that come here.”

An estimated 23 people will be employed at the new location – an increase of eight from the company’s current workforce. As part of the agreement, the dealership will pay the city $20,000 annually for the next 20 years, and the city will front $85,000 for infrastructure and in-kind services for the construction of the dealership.

“On two fronts, too,” he said. “On one side, there’s the dollar. Covington Electric and the convenience store are our only two businesses. We’ve always been looking for a better future. The more jobs it creates, the better it is for our town and our county.

“On the other side, there are no negatives with J.M. Jackson coming here,” he said. “Usually when business comes, there’s something – pollution from an industry, noise or the such. This deal has no negatives.”

This is the first economic development announcement for the community in years, but don’t expect it to be the last, he said.

“Right now, we’re negotiating with a dollar store to come here,” he said. “Nothing concrete yet, but it looks positive.”

Thomasson said he hasn’t thought in specifics as to what the added revenue might accomplish in the community.

“I haven’t really thought that far, but off the top of my head, I know the evident need is some kind of police force,” he said. “We’d like to pave one more street, and put up some lighting on the ones we have paved. Things like that. Good things for the town.

“Sanford is the ideal location,” he said. “It’s right in the middle between Opp and Andalusia. We knew industry would come someday, we just didn’t know when.”

The Alabama Hunter Education Course will be offered by the Alabama Conservation Department’s Wildlife and Freshwater Fisheries Division on the... read more