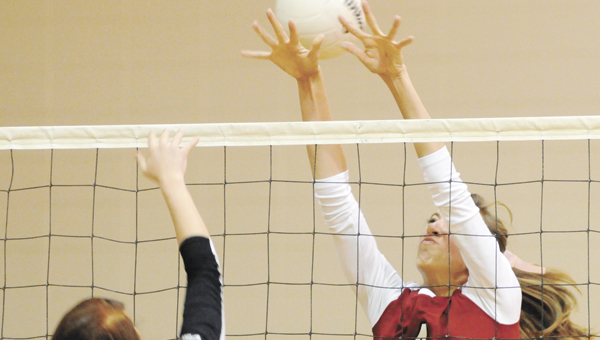 Andalusia’s Meredith Tillman tries for a block on a kill. The Lady Bulldogs swept Ashford and Straughn to claim the area title Tuesday night. | Andrew Garner/Star-News

That’s all it took Andalusia to win the Class 4A, Area 3 championship Tuesday night at AHS.

The Lady Bulldogs swept Straughn 3-0 in the tournament’s finals, and beat Ashford by the same score in the semis to earn a berth in the post season.

With this victory, Andalusia will play host to the Regional A tournament on Saturday.

“You work all year (for this),” AHS head volleyball coach Angie Grimes said. “You just hope and pray you execute well and keep your focus. The girls did. They played a great game.”

Straughn earned a spot in the post season and an area runner-up finish with a 3-2 win over Headland in its first match of the night. The Lady Tigers barely scraped by the Lady Rams, having to come back from a 13-2 deficit in the second game and a 5-0 deficit in the fifth game to pull out the win.

The last time SHS made it to the regional tournament was in 2009, when it was in Class 3A.

The Lady Tigers will also participate in the regional tournament at Andalusia.

Andalusia’s Shi’Amber Townsend had 12 kills and Alison Daniels added eight kills to help lead the Lady Bulldogs to a 25-13, 25-14, 25-20 victory over the Lady Tigers.

Andalusia got off to a good start, taking an 8-4 lead and with a 14-7 lead, Straughn called a time out to regroup.

Then, the Lady Bulldogs went on a late 6-0 run to take a 23-12 lead to secure the first game victory.

Straughn stepped up its game in the second set against Andalusia, breaking serves to tie the set four times.

With Townsend and Daniels on the ends, hitting speedy kills, Straughn’s back line was there for the digs.

SHS volleyball coach Marc Tracy said this match was one of the team’s “better matches.”

AHS cruised through the majority of game three before the referees had to call time to check on a lineup issue with the Lady Bulldogs.

After a brief pause, the game resumed.

“I hate that we had to lose the momentum in that third game because of what happened,” Grimes said. “When you lose momentum like that, it just worries me. But, we found it, and we got back and that was good.”

The Lady Bulldogs then went on to win the game and the championship.

Additionally, Daniels had five blocks for the Lady Bulldogs, and Omarria McGee had six service points.

The Lady Tigers bounced back from a 2-13 deficit in the second game to lose by only two, and faced late adversity when they trailed 5-0 in the fifth game to come back and secure a place at regionals.

“We tend to not make anything easy, especially on me stress-wise,” Tracy said. “We always play it out, and we pulled it through though.”

Tracy said in the second game, the girls gave Headland a great opportunity to win.

“I felt like we choked a little bit in that one,” he said. “I really think we had a chance to close it out in that fourth set, and we didn’t really pull through.”

Evan Frye had 15 assists and 12 service points, Johns added 13 kills and five aces and Courtney Fussell had four aces for the Lady Tigers.

“We’re excited,” Tracy said about the regional tournament. “We missed out on the playoffs last year and we’re glad to be back. We’re hoping to make a little splash at regionals on Saturday.”

Townsend had eight kills, Daniels had four kills and Shambrieka Burnette had seven aces to help lead the Lady Bulldogs.

After taking an early 0-3 deficit, Andalusia came back and outscored the Lady Yellow Jackets 25-6 in the first game win.

The Lady Bulldogs led at 20-9 in the second game and closed the first match out leading 20-12 in the third game.