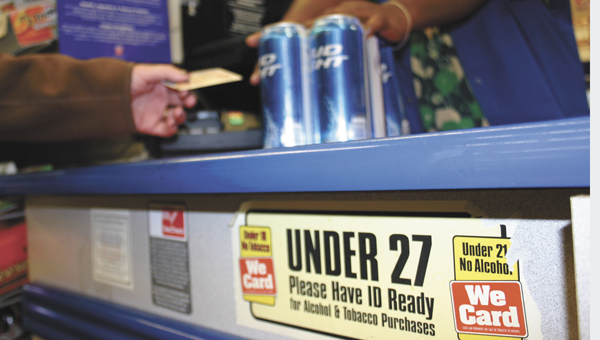 That was a question that 20 or so area alcohol retailers were asked Thursday as the Alabama Beverage Control Board, with sponsorship from the Covington County Children’s Policy Council, performed a check to see if clerks would sell alcohol to minors.

“We did what we call a minor detail,” said Lt. Lance Price of the ABC Board. “We send in a minor who attempts to purchase alcohol. Then, we wait to see if the clerk makes the sale.”

Agents used a decoy – a 17-year-old white female, who looked exactly like a teenager should, and provided her own ID to clerks – for the exercise.

The practice is routine for ABC agents. Price said the agency performs an alcohol and tobacco check each month in its six-county district.

“What that means is Covington County gets checked at least twice a year, plus anytime we do a special detail,” he said.

Which is where the local Children’s Policy Council comes in, said executive director Susan Short. She said the group received a Drug-Free Community grant from the federal government, which was used to help fund the detail.

“The goal is promote alcohol and drug prevention through education and to try to effect the environment, and a prime example is to prevent underage people from buying alcohol illegally,” Short said.

“Our goal is to combat underage drinking, and to protect Covington County – not that we have a problem here,” he said. “We just want to make sure that no kids get alcohol. That saves lives.”

Price said as of 5 p.m. Thursday, each of the stations checked complied with the law.

“And that’s outstanding,” both Price and Short agreed.

“And generally most don’t sell,” Price said. “But it does happen, and when it does, there are stiff penalties.”

When the work was completed, only one arrest had been made – at the Opp Circle C.

The first offense is a $750 fine for the storeowner, and the clerk is arrested and issued a citation to appear in District Court, where they face a fine of $50 to $500.

David Pettie, shown here with wife, Carolyn, and children, Hunter and Lakyn, was able to take his family to Disney... read more