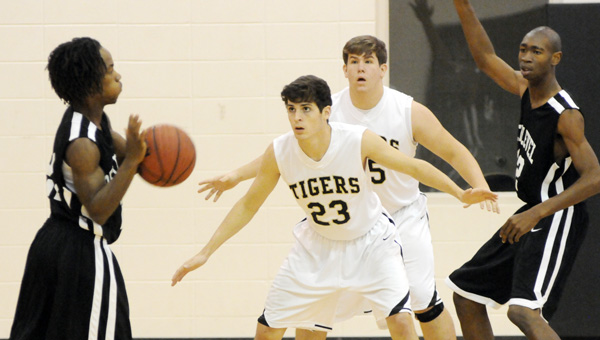 SHS beat Red Level 45-42 on second-half defensive effort, spreading the ball around, and Pleasant Home rolled to a 67-36 victory over Kinston.

The game came down to the wire for Straughn and Red Level, but the host Tigers amped up the pressure in the second half and forced turnovers late to get the win.

SHS head boys basketball coach Rusty Andrews said there weren’t any adjustments made, other than “tightening up” the defense.

“We felt like we had played well in the first half even though we were down nine,” Andrews said. “We’re improving, and that’s what I’m most proud of. They’re learning to work hard and they’re finally closing the ball game.”

“We hadn’t been playing hard the last three ball games like we should have,” Catrett said. “We literally, literally, threw the ball game away and that means turnovers.”

Hobie Hughes made the game 44-42 on a successful pass from JD Driver.

In the meantime, Red Level kept close to SHS throughout the fourth period, where the game was the closest.

Dee Tolbert hit a 3-pointer to tie the game at 40-all, and Raheem Bullock helped RLS take a 42-40 lead on a drive to the basket.

JD Driver found Avery Driver to tie the game back up at 42-all with 1:15 left, where RLS took a time out to regroup.

Straughn’s Avery Driver sealed the victory by making the front-end of a pair of free throws with less than 10 seconds remaining.

RLS outscored SHS 17-9 in the second period, and held a 9-8 lead after the first period.

Red Level held a 26-17 lead at half time thanks to a James Feagin put back at the buzzer.

Lance Davis led the Eagles with 20 points in Pleasant Home’s rout over the Bulldogs on Saturday.

Kinston and PHS were evenly matched in the first period and after a pair of free throws from Davis to tie the game at 2-2, the Eagles took charge from there and never gave up the lead for the rest of the game.

“It was one of those days where when you throw the ball up, it went in,” PHS head boys basketball coach Jerry Davis said. “I doubt we’ll have many nights like that.”

Kaleb Powell later got a steal after a Kinston time out, and was fouled and made two free throws to put the Eagles up 23-10.

Davis then hit two 3-pointers back-to-back to give the Eagles a 29-10 lead with less than five minutes remaining in the half.

Pleasant Home led 39-13 at the break off of a 3-pointer by Chesser.

PHS didn’t let up in the second half, and the game went to one where Davis and Powell were on the same page.

Powell would find players on the inside, and Davis hit drives to the basket or passes for easy buckets and the Eagles led 55-23 going into the final period of the contest.

Kinston managed to outscore Pleasant Home 13-10 in the fourth period thanks to a last-minute effort.

Tyler Worley chipped in 12 points, and Jeffery Slaughter had eight points for the Eagles.

Pleasant Home will play host to J.U. Blacksher today at 4:30, starting with the B-team.

Enterprise beat Brantley 63-51 in the finals of the 45h annual Andalusia Invitational Tournament tonight at the high school. The... read more