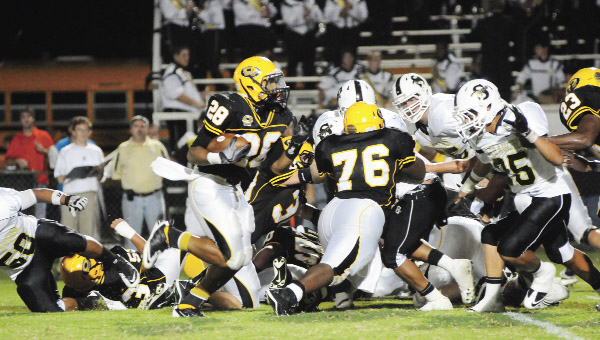 Opp and Pleasant Home released their 2012 football schedules recently, and one thing the coach from each team said about the upcoming season is that region play will be “tough.”

OHS head coach Jack Whigham said his team will enter a region with a lot of post season experience.

“It’s going to be a fight to make the playoffs,” Whigham said. “I really believe that.

Whigham said additionally that Straughn will also pose a big threat, and added that he’s happy that the Bobcats will play the Tigers so late in the season at week nine to close our region play.

“It allows us to have a region and rival game at the end of the year,” he said.

The Bobcats will open the season against Class 1A Elba (who won the Class 2A state championship this year) and then will face Miller, Bayside Academy and Excel to begin region play.

In week five, OHS will face rival Andalusia, then will face Southside Selma, Cottage Hill, W.S. Neal, Straughn and will close out the regular season against Pike County at home.

Pleasant Home opens the 2012 season at home against Cottonwood, and then will play Red Level, Kinston and Florala to open Class 1A, Region 2 play. Week five is an open date for the Eagles.

After the mid-point of the season, the Eagles will face area opponents Georgiana, Geneva County, Brantley, McKenzie and J.U. Blacksher in regular season action and on the back-end of the season.

“They were a real good football team this year,” he said. “I know Florala is going to be much-improved. By adding Red Level in our region, I think we’ll have a pretty tough region for 1A football.”