Stories that touched us 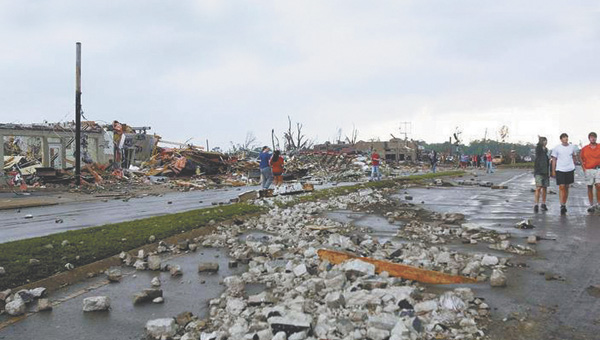 It was the year of fiscal showdowns in Washington, and Occupy Wall Street demonstrations across the country.

It was the year when Moammar Gadhafi was toppled in Libya, the year of the Arab spring that swept change throughout the Middle East. A 9.0 magnitude earthquake in March triggered a tsunami in Japan that left 20,000 people dead or missing and created a nuclear crisis.

But in Alabama, we’ll remember it as the year of the April tornadoes; the year the trees were poisoned at Toomer’s. At home in Covington County, there were good times and bad times – a World Series that brought hundreds to the place we call home, giving us a chance to showcase famous Southern hospitality. It was a time when tragic accidents took the lives of students too young to go; a year when we worked to preserve our history.

These are the stories that touched us in 2011.

• April’s deadly tornadoes were the top story of 2011 in Alabama. Waves of tornadoes plowed across the northern two-thirds Alabama on April 27, killing about 250 people and leaving a path of destruction that stretched for hundreds of miles. Tuscaloosa was badly hit, and a number of local students shared stories of their survival. Covington County residents rallied to send much-needed supplies north, and efforts to help victims continued with a coat drive in the fall.

• Red Level High School football players wait on the field for the arrival of their fallen teammate, Levi Neal, at his funeral in May. His number, 58, was painted at midfield. Neal and his best friend, Evan Carpenter, died in a wreck.

• Historic Springdale became home to many community events, like the AJWC’s annual Three Notch Market. Here, Andalusia native Rochelle Harper and her band perform with local children during the one-day festival in May.

• Andalusians were thrilled when the Bulldogs posted their first undefeated regular season since 1977, but no fan was happier than Drew Seymore, son of head football coach Brian Seymore. Drew invited ESPN to an Andalusia game, “because we are good.”

• The community rallied around Cooper Sasser and his family as he battled leukemia. Cooper received more than 800 cards for his birthday.

• The historic Church Street Elementary School was reopened as the Church Street Cultural Arts Center and the home of the Andalusia Ballet through a public-private partnership between the ballet and the City of Andalusia.

• We bid a final goodbye to a number of people in 2011, but perhaps none more colorful than Judge Bill Baldwin, a Pearl Harbor survivor who was buried on his 91st birthday. First United Methodist Church was packed for Judge Baldwin’s funeral, with all members of the Lions Club serving as honorary pallbearers. The Rev. Tim Trent said he knew he had to keep the eulogy short: Baldwin was known, lovingly, for his impatience, and kept track of the length of Trent’s sermons each week.