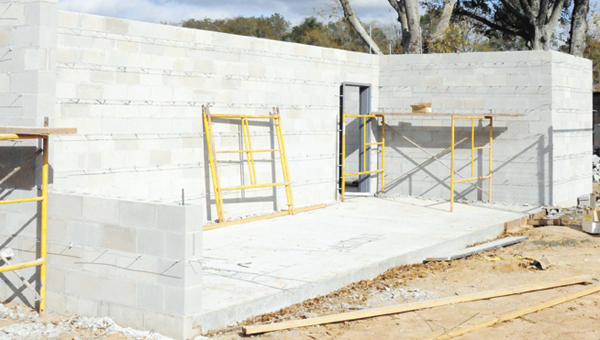 The trusses will be installed Saturday on the new dugouts at AHS. | Andrew Garner/Star-News

On either side of Andalusia High School’s baseball diamond, the new dugouts are beginning to take shape.

The foundation was poured in December, and the cinder blocks have been put in place to give the team shelters a rectangular shape.

AHS baseball coach Jonathan Rasberry said the dugout on the visitor’s side will have a storage space, along with an area for the visiting team to sit. On the home side, there will be a dressing room complete with an office.

“We’ve had some great support from the community,” Rasberry said. “There are a lot of people in the community and I want to thank them — not necessarily individually, but as a whole those that are helping support this dugout-fund.”

The Diamond Club was the initiator of the project, and orchestrated the fundraising of the project with the City of Andalusia. The city is the foreman of the construction of the dugouts and is helping with the build, club member Greg Henderson said.

In the Diamond Club’s request to build the new dugouts, it stated that the purpose of the new dugouts was to fulfill the new high school rules on proper roofing.

On Saturday, parents will be helping to put the trusses on the dugouts, Henderson said.

Rasberry said the Diamond Club, which consists of parents of current and former baseball players, headed up most of the fundraising efforts for the project.

Additionally, these new dugouts will give the players a space to get dressed before games, and are at ground level.

“That has been a concern since I’ve been here,” he said about getting ready for games. “And not being in the ground, we will be on the ground level and that will allow for better drainage.”

The old dugouts were built underground.

Rasberry said he anticipates the project will be completed by Feb. 20, the Bulldogs’ first game.

“I want to thank the city for also helping with the project,” Rasberry said. “They’ve done a lot of stuff to help us out.”

Joe Flowers had 16 points for the Bulldogs Tuesday night. | Andrew Garner/Star-News Andalusia took the lead mid-way through the... read more