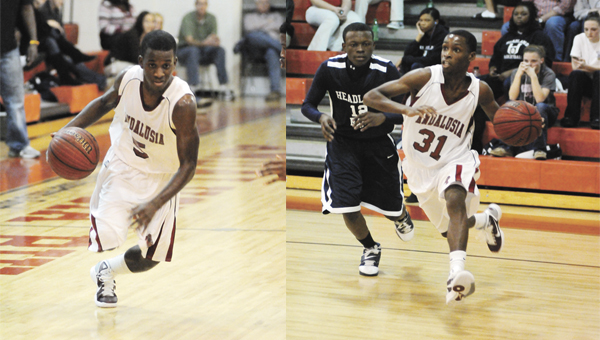 Faulkner State Community College guard Derrick King (left) and LBWCC guard Quayshaun Denson will battle against each other tonight in conference play. Tonight’s game will be the first time the two Andalusia natives will play against each other. | Andrew Garner/Star-News

For the better part of their basketball careers, whether it was through the rec league, middle and high school, Derrick King and Quayshaun Denson have played together and have had the same desire to win.

That desire will be tested tonight as both will face off against each other in conference play as King, a guard on Faulkner State Community College’s Sun Chief’s basketball team, will come home to face Denson and the LBWCC Saints at Seth Hammett Gymnasium.

“I’m pretty excited about it,” King said by telephone on Wednesday. “It’s going to be in front of the home crowd.

Denson added: “It will be a little weird, especially when we’re guarding each other,” he said. “It will be crazy.

“I know it’s a big game,” he said. “I was talking to Derrick earlier and encouraging him. Maybe one day, we’ll make it to the next level.”

The Bulldogs finished the season with three losses, and 31 wins.

Careening down the basketball court, King would bring the ball up for the Bulldogs and would soon find Denson on the post for a pass on the inside during their high school days.

Tonight will be different as FSCC enters the game with a 14-6 record on the season. The Sun Chiefs are 5-1 in conference play, taking the top spot.

“They have good fight in them,” King said about his opponent. “They play hard.”

Denson said the Saints need to keep playing as a team in preparation for tonight’s game.

“Run the plays and do what coach says and we should be all right,” he said.

King said he and Denson have been bantering back and forth in friendly way about the match up tonight.

“We’ve been talking about it a lot,” he said. “I’m just ready for it to happen. I hope it’s going to be an all right crowd again. I hope it will feel like high school again, playing in front of everybody.”

King said Denson and himself wouldn’t have been where they are if it wasn’t for AHS coach Richard Robertson.

“He hleped us prepare for us to work hard, and knew how to get us ready,” he said. “He knew I could do something. Once I left Andalusia, I was ready to fight and play.”