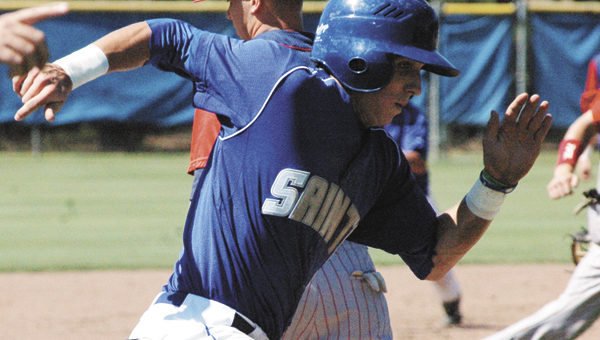 LBWCC sophomore and Opp native Gavin Free runs from third base during a game last season. The Saints will have experience on the field, and a young pitching staff this season. | File photo

Through 14 innings, LBWCC’s Saints baseball team was tied 4-4 with Auburn University Montgomery on Tuesday in a scrimmage game, and head baseball coach Steve Helms said it was a good experience for the team going into the season, which begins tomorrow.

“To hold a team like that to four runs, it’s not bad,” Helms said. “It was a good experience for us and it let us see some of the mistakes we made.”

The Saints enter this season with a slew of experienced sophomores, and talented freshmen.

There are two local kids who are freshmen on the team in Josh Dewrell and Andrew Burleson. The local sophomores include Gavin Free, Zach Sasser, Aaron Haag and Josh Thompson.

“We’re going to be experienced on the field, position-wise, but we’re going to be young on the mound,” Helms said. “But, I think our talent on the mound is pretty good. If they develop and our sophomores continue to develop, then we’ll be in the middle of the mix.”

In conference play, the Saints are a part of the Southern Conference of the Alabama Community College Conference.

LBWCC’s conference schedule will begin on Feb. 28, where the team will have to play each team in its conference five teams. The games will take place on Tuesdays and Saturdays with a doubleheader each day.

Then, after conference play, the Saints will go back to a normal schedule.

Helms said it’s going to put a lot of wear and tear on the players, but the goal is to not allow them to get injured easily.

“We’ve gone to where we’re conditioning a lot,” he said.

One of the reasons why Helms said the team is conditioning more — other than the amount of games in the conference — is because of the new core in the bats, which have the same “exit” speed as a wood bat. The players still use aluminum bats during games.

“The bat has changed the game to more of a speed game,” Helms said. “It’s the new BBC cores. It’s changed everything. You won’t see the home run as much. The bsall just doesn’t travel.”

And as a result of the new bats, Helms said they had installed more of a pliometrics regime during work outs.

The Saints will throw their first pitch of the new season tomorrow for the T.J. Fleming Invitational tournament in Andalusia. The tournament will end on Sunday.

On Saturday, the Saints play Marion Military at noon, and the Meridian at 12:30 p.m. on Sunday.