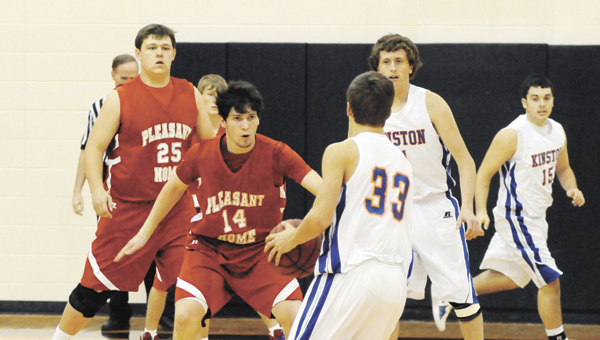 Pleasant Home’s Lance Davis (14) and Josh O’Neal (25) guard during an earlier game this season against Kinston at the Straughn Christmas Tournament. | File photo

The regular season is complete. The preparation is done.

Now, it’s time to see how much the hard work will pay off.

Pleasant Home coach Jerry Davis said Tuesday his team is looking forward to tomorrow night’s tip off against Kinston in the first round of the Class 1A, Area 2 tournament.

“That’s what you play all year for this time of the season,” Davis said. “You hope you have everything prepared.

“They’re looking forward to it,” he said. “The seniors know that this could be their last time on the floor. They’re not over-confident, but feel good about themselves.”

The Eagles finished the regular season 18-7, and will face the No. 4 seed Bulldogs in what Davis said has been the school’s biggest rivalries.

“You’ve got one shot at it,” he said. “You just always are trying to make sure you’re prepared. That’s the biggest thing.”

A team needs to win the first round of the area tournament to be able to advance to the sub regional tournament next week, and have a chance to win the area championship. The tournament format is single elimination.

Davis said practice as of Tuesday has been good for the team.

“We brought up some (junior varsity) kids and that gave us a little more energy. We’re still two days out, and they’ve gotten after it pretty good.

“We’re just adding a few things to try to give us some different looks at what people are doing,” he said. “Just making sure the ‘Ts’ are crossed and the ‘Is’ are dotted.”

For the Lady Eagles (13-5), girls coach Kelley Garner said her girls have had the best practices this week they’ve had all season.

“I feel like we’re prepared and we’re ready,” Garner said. “The girls are focused. We’re just ready to get started and see how far we can go in this post sesaon.”

All week this week, Garner has stressed to her girls to go in the game not over-confident.

“You don’t take anybody lightly at this point,” she said. “Everybody’s record is 0-0 and everybody wants to win.”

Since the Lady Eagles won the right to host the area tournament on a coin flip, they’ll be playing the same night as the boys tomorrow.

Tip off for the Lady Eagles against Kinston is at 6 p.m., followed by the boys at 7:30.

Lastly, Davis said there’s nothing to do now but go out and play the game.

Bullard gives all, a little more on court