One more for it all 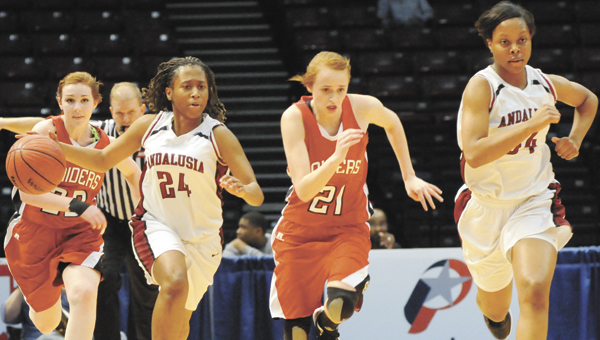 Andalusia’s Alexis Horton (24) drives down the court after a steal Wednesday during the semifinals of the Class 4A state championships. Shi’Amber Townsend (far right) assists. | Andrew Garner/Star-News

Three post season games ago, Andalusia’s Lady Bulldogs were getting set for the semifinals of the Class 4A South Regional Tournament in Mobile.

The Lady Bulldogs went on to win the regional title, beat top-ranked Good Hope on Wednesday 62-54 and will play for the most coveted trophy in the state this morning at the BJCC Arena in the state championships, against fifth-ranked Jacksonville.

When it’s all said and done though, there will be one champion.

AHS coach Bennie Shellhouse, who earned his 107th win with the Lady Bulldogs on Wednesday, said he feels like the girls will be ready to play.

“This has been our goal the whole year, so I feel like we’ll come out ready to play,” Shellhouse said.

Sixth-ranked Andalusia (30-2) will face a Jacksonville team that utilizes its size on the inside.

Jacksonville beat Midfield 53-42 with the help of double-doubles from Kenyatta Ervin and Sharon Osterbind.

Osterbind, who got most of her points off of fast breaks and put backs during the game, scored 18 points and had 12 rebounds to lead JHS. Ervin added 13 points and 10 rebounds.

“They’re big inside,” Shellhouse said. “They’ve got No. 30 (Osterbind) as the big girl inside. She’s going to cause us some problems getting up and down the floor. We’re just going to try and keep that girl off the boards because she got most of her points off of putbacks and fast breaks.

“The guards handle the ball pretty well,” he said. “No. 11 (Virginia Poe) shoots the ball well from the outside.”

Doing most of the distributing for JHS was No. 24, Lacey Buchanon on Wednesday.

“She does a great job distributing the basketball,” Shellhouse said. “We’ve just got to make sure we play smart and a big key to us is not picking up those early fouls.

“We need to be able to put that pressure on them toward the end of the ball game,” he said.

“We picked up early fouls yesterday (Wednesday) and the ball game was close at the half,” he said. “Because we didn’t get ourselves in foul trouble in the third period, we were able to play harder in the fourth period.”

That will be essential for the Lady Bulldogs, who were tied with Good Hope at 44-all after the third period the other day.

Tip off is at noon today.

Shellhouse said girls will be fine after the ball is tipped off.

“I think it will have an effect on the mental psyche (of the players),” he said. “Once the ball game starts and every body settles down after the first four or five minutes, I’ll think it will be fine.”

But, getting prepared for the state championship three games ago was the hard part, Shellhouse said.

Now, the Lady Bulldogs just have to play one game for it all.