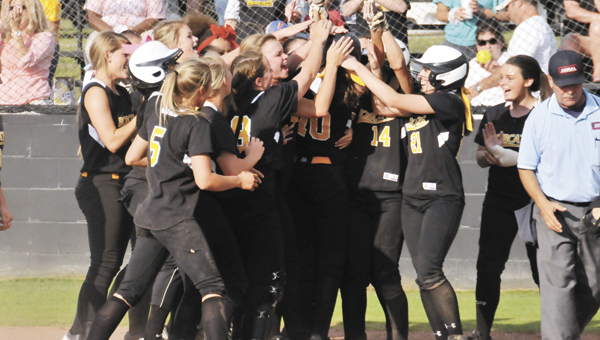 That was the case for Opp on Tuesday as the Lady Bobcats scored four runs with two outs in a 7-4 eight-inning area victory over Straughn at SHS.

Laiken Free, who was due for a big hit, creamed an inside pitch over the right center field fence for the game-winning three-run home run with two outs in the top of the eighth for the Lady Bobcats.

Straughn and Opp were tied 3-3 going into the seventh inning, where Opp struck first on an RBI single from Courtnee Chatham to take a 4-3 lead.

The Lady Tigers answered back in the bottom half of the inning when Molly Stewart scored on an error after reaching on an error to tie the game at 4-all.

Savannah Gerber was walked and Kelley Pierce doubled to put two on base for Free.

Free, who had a hit in the first inning, said she was waiting for the right pitch.

On a 2-2 count, Free launched her home run over the fence, rounded second with a big grin and ran into the waiting arms of her teammates at home plate.

Free’s home run last night was her first since the start of the year.

With this victory, the Lady Bobcats improve to 24-6 on the season, and are 4-2 in Class 3A, Area 2. Straughn, who won the regular season area title based on its winning percent against Class 3A opponents or higher, will host the area tournament next Thursday, which starts at 9 a.m. The Lady Tigers and Excel also finished 4-2 in area.

“Chatham had that clutch hit and that drove in the go-ahead run in the seventh, or we would’ve lost,” OHS coach Jimmy Reeves said. “Savannah got a two-out hit there at the end, which was just as big. Kelley Pierce got a hit. My first three hitters came up with hits with two outs.”

Opp’s Katlynn Schively got the Lady Tigers out in order during the bottom of the eighth and got the save. She threw 4.1 innings and allowed three runs on four hits and struck out three.

Anna Harrelson pitched 2.2 innings and allowed one run on one hit, while striking out one and walking five batters to get the win.

Harrelson was pulled in the bottom of the third inning after SHS scored one run on a fielder’s choice from Stewart to cut the Lady Bobcats’ lead to 2-1.

OHS scored two runs in the top of the second on a fly out from Cayla Hughes and a fielder’s choice from Pierce.

Colby Adams scored on a single from Katelyn Kinsaul in the bottom of the fourth inning to put the game at 3-2.

In the sixth inning, Straughn tied the game at 3-3 when courtesy runner Jacie Williamson, who ran for Payton Mitchell, scored on Brentley Armstrong’s single to left.

“First of all with Opp, it’s hard to keep them down for seven and you’re probably not going to keep them down for eight,” SHS coach Trent Taylor said. “They’ve got a really good team, and it really showed there in the end. We went down 2-0 and battled back and tied it up, and went down 3-2 and tied it up with 3-3. We got some big hits with two outs to get the run in.”

Opp’s Octavia Thompson scored the go-ahead run in the top of the seventh inning after firing a laser down the center. Thompson went on to steal second and third before making it home on Chatham’s single.

Straughn’s Hayden Willis allowed seven runs on 11 hits and struck out one in 7.2 innings for the loss.

“We’re not happy with the way we’re playing right now, but you’ve got to give Straughn a lot of credit,” he said. “They’ve improved and they just give us all we can get, and more. It ought to be a good area tournament next week.”