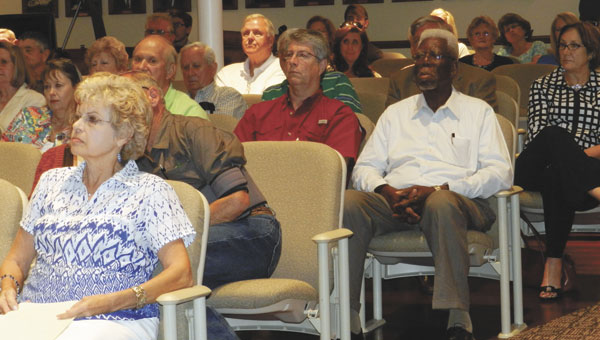 Tuesday night’s council meeting drew a large crowd of people largely split on the issue of a new sales tax.

Members of the Andalusia City Council voted unanimously before a full auditorium to raise its sales tax by a cent-and-a-half, effective July 1.

“The congratulations go to the City of Andalusia,” Mayor Earl Johnson said when approached by a well-wisher. “Time will tell, and I think the people will see, that this was the right thing to do. Everyone will be fine if some people will stop shouting from the rooftops that this is going to kill us.”

The vote came after the council spent almost two hours listening to comments from 20 residents. Of the 21, 10 spoke against the tax, 10 were for it, and one pointed out that more people should attend meetings more often. Each was given three minutes. To read what they said, click here.

In proposing the tax, the mayor said the city needed additional revenue to meet its approximately $2.5 million matching funds for an $8.6 million grant to basically rebuild South Three Notch Street, including utilities, sidewalks and lightings. One-half cent of the new tax will go to the city school system to initially fund capital improvements and later fund new programs.

The protests of a number of people in a public meeting Monday night and at Tuesday night’s meeting netted a commitment from the mayor and council members that they will look at the issue again in two years. The sentence “the Andalusia City Council commits to revue the impact of this ordinance on its second anniversary,” was added to the ordinance, which was originally proposed two weeks ago, on May 7.