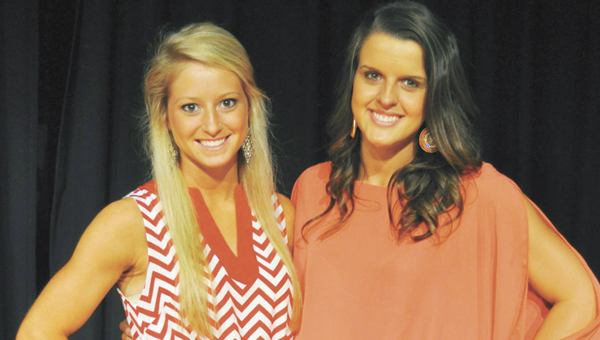 Savannah Gerber (left) and Jaci Parker will cheer on the Trojans this fall at Troy. | Courtesy photo

Opp’s Savannah Gerber and Jaci Parker will lead the Trojan nation in a rousing rendition of “T-R! Whoop-whoop! O-J! Whoop-whoop! A-N-S!” this fall as two of Troy University’s newest cheerleaders.

Gerber and Parker attended a tryout for the cheer squad April 26-28, where they learned a cheer, a chant and the fight song, and performed it in front of the cheer officials.

For the past two years, Gerber said she’s known she wanted to try out for the squad at Troy.

“I just didn’t want to go far from home,” she said.

Parker said she attended a previous tryout session last year and knew then that she wanted to cheer on the Trojans.

After performing the cheer, chant and fight song in front of the cheer officials on Saturday, Gerber and Parker said they learned they’d received the scholarship on Sunday.

When asked if this was a big highlight in their lives, Gerber said it’s been a long time coming.

“It’s like we’ve been working toward it for a long time, and we finally got it,” she said.

Parker and Gerber have been cheering together since seventh grade at Opp Middle School. They cheered for two years at OMS, and then four years at Opp High School.

They were a part of the OHS squad who won the Class 3A state championship earlier this year.

“I realized when I was in ninth and tenth grade that I wanted to do this in college,” Gerber said.

Parker said she wasn’t sure until the end of her junior year.

“Really, it was when the year ended,” she said.

Gerber and Parker said their favorite part of cheering is being at the football and basketball games.

“I just love it,” Gerber said.

On Friday, Gerber and Parker will report to Troy, where they’ll start summer practices. The first session lasts until June 2. There are five weekends the girls will hold cheer practice.

Straughn’s Daryl George (20) runs down the field during the third round of the Class 3A state playoffs in November.... read more