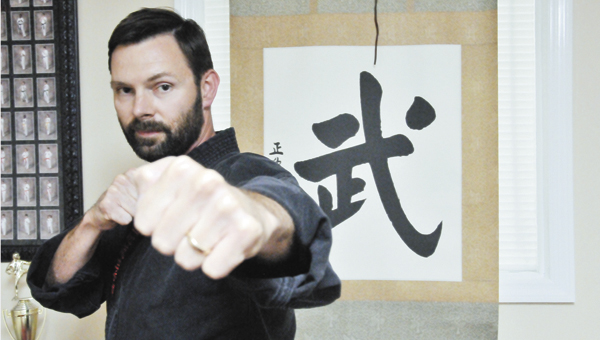 Dr. Kenny Blackston may get nervous competing in karate tournaments throughout the year, but the Andalusia optometrist said he’s ready for the 2013 South Alabama Karate Open on Saturday.

Blackston will be competing in the adult senior men’s black belt division in kata, weapons and Kumite (sparring) at the 16th annual karate event at Straughn High School.

For the past four years, Blackston has been learning the Isshinryu Karate form and mastered a black belt in three and a half years.

“It took a lot of hard work and discipline (to get my black belt),” Blackston said, “and a lot of bumps and bruises.”

Blackston said he got into martial arts after his three sons — Caleb, Garrett and Dillon — saw a karate demonstration from the Andalusia Isshinryu Karate class at the public library four years ago.

“I’m at a point in my life where it would be in my best interest to try to stay physically fit,” Blackston said. “I’ve always struggled with running or sticking with a certain program because most things stay repetitive, and redundant and mundain.

“There are some repetitiveness in learning kicks and katas, but there are a lot of dynamics and varieties (in the Isshinryu Karate form),” he said. “There are things changing enough to keep your attention mentally, and keep engaged physically.”

Now that he has his black belt, Blackston admitted that he gets more nervous before events of this caliber.

“I always get some jitters, especially now that I have my black belt,” he said. “It’s a whole nother league.”

Blackston has a wife, Stephanie; along with his three sons.

Spending time with their families. That’s the game plan for coaches and their families this weekend as the Coaches Camp... read more