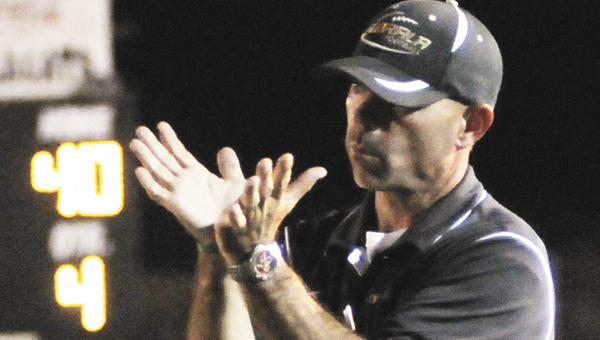 New Florala head football coach Bubba Nall said he had mixed emotions when he was asked to take over the Wildcats’ football program last week.

While vacationing in Orlando, Fla., this week and waiting on Tropical Storm Andrea to blow over, Nall said by telephone that he — along with the rest of the coaching staff — will carry the FHS program to new heights.

“There were some mixed emotions to begin with,” he said about being named the head coach. “Not only did our players lose their head coach, I lost the man who brought me down here. I lost a very good friend and I lost family — (Jones) and I are first cousins.

“Coaching changes are inevitable,” he said. “You can live with it or die with it. I’m thankful that I have an opportunity to continue where he and I got started two years ago, and hopefully, maybe we can carry this thing to the next step.”

That next step is improving from the past two years, the coach said.

“The next step is to have two back-to-back winning years, making it to the playoffs and continuing to do things the right way,” Nall said. “That’s my vision for this program is for us to go ahead and get further, and take the next step to year three.”

Nall said the foundation was laid during his first year with Justin Jones in 2011.

“Last year (2012), I think we began to build a few walls on the house,” he said. “Now, we need to continue to build this thing the way we want to build it. I think we’re headed in the right direction.

“I’m honored that (FHS principal) Mr. (Donny) Powell and Covington County feels like that I’m the man who can continue us in the right direction,” he said.

To take over the defensive play calling, Nall is bringing in Brian Jones of Samson.

Nall has worked with Brian before and said that he has an “outstanding track record of being a very good defensive-minded football coach.”

Nall said he’ll perform the offensive coordinator duties as well as be the head coach for the team.

Nall said he’s excited about the opportunity to coach the Wildcats in a new capacity this fall.

Next week, the Wildcats will start their summer workout program. They’ll lift Tuesdays, Wednesdays and Thursdays, starting at 7:30 a.m.

FHS will not lift July 4-5 and 15-19 for the holiday and the All-Stars break, respectively.