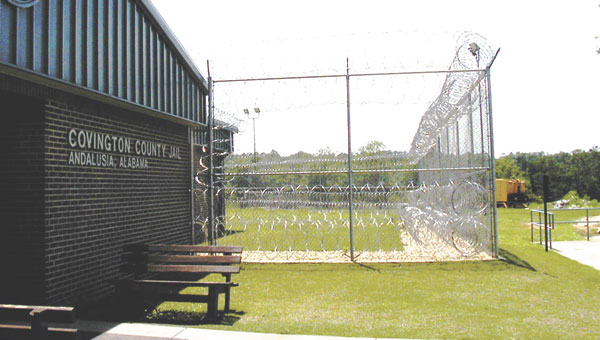 An exploding population of women inmates has county officials eyeing an expansion at the Covington County Jail.

“We’ve been gradually getting up there in women’s population at the jail,” Godwin said. “One day, we were at 100 percent over capacity, and with the increasing problem of bad checks and drug arrests, I believe the number of women arrested is only going to go up.”

“We have had as high as 48 women in there at one time,” he said. “We got a letter from our insurance carrier saying that raised a red flag and could cause future problems, so something needs to be done.”

Godwin said he asked for the discussion to be placed on Wednesday’s agenda. He said if commissioners agree, the project would call for the extension of the existing jail facility out to the exercise yard.

“What I’m talking about is do a bare minimum security, four-walls and a ceiling, dormitory-style structure,” Godwin said. “Most of the women in the jail aren’t there for violent crimes. It’s bad checks and drug use, but if there is a problem with an inmate, then that inmate could go inside to a holding cell.”

Godwin said the county must first hire an architect.

“Once we do that, I would think the project would take about a year to get completed,” he said.

Godwin did not speculate on a cost for the project.

Man pleads to rape of child

A Luverne man has pleaded guilty to a 2009 rape of a child in Opp. Freddie O’Neal Takersley was arrested... read more