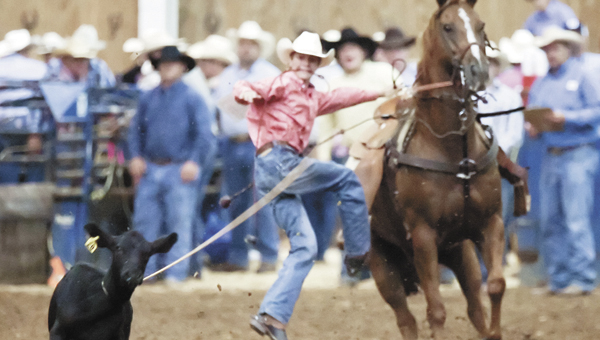 Gus Maraman gives a nod of his head and then he’s right where he wants to be — with himself, his horse and the calf.

Maraman, a rising junior at Andalusia High School, will join nine other local cowboys and cowgirls in this week’s Alabama High School Rodeo Association State Finals at the Covington Center Arena, which is slated to kick off today.

The actual rodeo competition starts on Thursday, where Maraman will compete in the calf roping event.

Rodeoers all have one goal at the state finals — to make it to nationals in Rocky Springs, Wyo.

Maraman, who lives in Andalusia and ropes in Rose Hill, was practicing Tuesday afternoon to get ready for tomorrow’s first go, which starts at 9 a.m.

Maraman’s goal for the finals is simple.

Rodeoing is a year-long sport and currently, Maraman sits at around sixth in the state in calf roping.

“I’ve done pretty good this year,” he said, noting that he’s excited about this week’s finals.

The night go tomorrow is at 7:30. The morning and night gos will be the same for Friday as well.

Maraman said he has to do well on Thursday and Friday to advance to Saturday’s short go, which starts at 7:30 p.m.

The top 10 in each event take the arena floor on Saturday for a chance to advance to nationals.

Maraman has been rodeoing for the last three years. He got into it when he was a young boy after his father, Mark, picked it up from his grandfather, Dickey.

Rodeoing is the one thing that truly makes the Andalusia student happy, he said.

“It’s a one-man sport, which involves an animal,” Maraman said. “You don’t have to revolve around a team. It’s just me, the cow and the horse. That’s all I have to worry about.”

Maraman is also the son of Debbie Maraman of Andalusia.

MONTGOMERY — Straughn’s Lady Tigers played hard both games Friday, but came up short as they ended their season in... read more