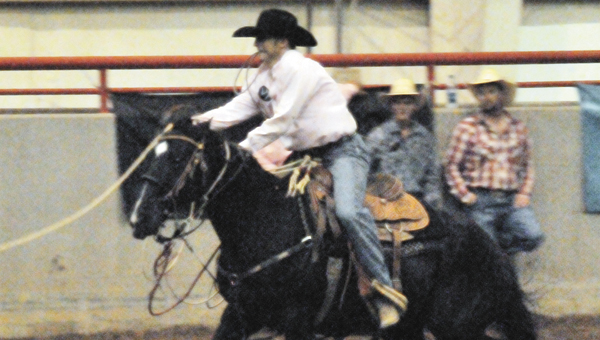 A mini-van and three trailers full of horses.

Caleb Varner of Red Level; Clay Elmore of Opp; Gus Maraman of Andalusia; Maggie Holmes and Jordan Whitman of Straughn; Chase Hargrove of Florala; and Bailey O’Ferrell of McKenzie will ride and compete with the toughest competition from 43 states at finals, which will be held July 14-20 at the Sweetwater Events Complex.

Whitman and Varner will be competing in the team roping event, which will take place on Wednesday. Both will have the chance to tie and take down three cows.

Being consistent is the most important thing you can be at nationals, Varner said.

“We just got to get three cows down and we should be alright,” Varner said. “That’s the big thing, just being consistent against all of the other people all over the nation.

“If you’re inconsistent and mass up one run, you’re pretty much through,” he said.

On the team, Whitman is in charge of roping the cow so Varner can get down from his horse and make the final tying of the roped animal.

“I just got to go out there and hug the barrier and turn the cow up for Caleb, and let him do what he does,” Whitman said.

Varner said he’d like to capture the top prize.

“I’d like to come home with the saddles, those big shiny saddles,” he said. “That’s been a big dream of mine — to win the team roping saddles.”

While one event may be daunting for a few riders, Bailey O’Ferrell of McKenzie will take the reins on five events at nationals.

O’Ferrell, who is home schooled, will ride in barrels, goat tying, poles, cutting and team roping.

Additionally, O’Ferrell will be making her second straight appearance at nationals next week. She competed last year.

“I’m kind of nervous, but I’m going to try to do my best,” O’Ferrell said.

Barrels is the event O’Ferrell said she’s looking forward to the most and feels the strongest about.

Her goal is simple — to make the short go. The top 20 from each event qualify for the short go round.

“That would be pretty impressive,” O’Ferrell said.

Making it back to nationals can be a pretty hard feat to accomplish.

That’s why O’Ferrell said she made it an early goal to return to Wyoming.

“This year I have more events and know what to be prepared for since last year,” she said. “I’ve done a lot of preparation going into it.”

Elmore will be competing in the calf roping event Tuesday and Thursday.

The Opp graduate, who signed to rodeo at Troy University on Tuesday, said he just wants to do his job.

“I’m not trying to be flashy,” Elmore said. “I’m just trying to get the right mindset while getting it done and being consistent.”

Elmore said he has the big goal of winning the overall calf roping event.

“One of my middle to lower goals is at least to make the short go and place pretty high in nationals out there,” he said.