Proud of their All-Star 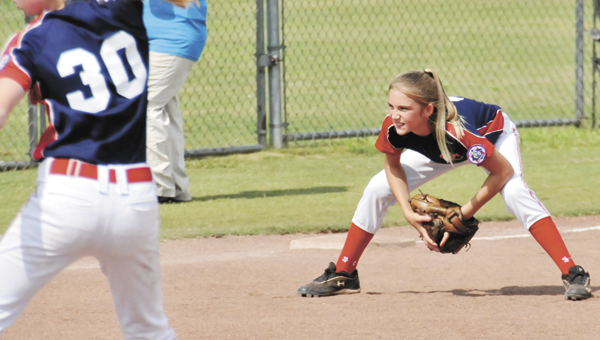 Nicole Hodges had the biggest smile on her face when she watched her son, Hagen and the Opp 12U Cal Ripken All-Stars accept the state championship trophy on July 1 at Johnson Park.

Nicole, like many other athletes’ parents, is proud of what her son accomplishes on the field of play.

“To see him work for something and work so hard to achieve it, I don’t really know how to explain it,” she said. “I’m extremely proud of him.”

The best part of watching Hagen play is his joyous and helpful nature, Nicole said.

“He’s so proud of the other teammates,” she said. “He’s so encouraging. He runs out and high fives them. It’s just been amazing and a wonderful journey.”

Hagen has been playing ball since he was old enough to swing the bat for the T-ball league.

Hagen’s father, Mark, works off shore and gets frequent updates about what his son is doing on the field, Nicole said.

“His daddy is so proud,” she said. “He’s missed every game of the tournaments. It just means a lot to our families.”

With the state championship win, Opp will travel to North Carolina to play in the 12U Regional Tournament.

Nicole said Mark will be home for the regional tournament later this month.

Ashlyn Joyner, the daughter of Stacey and Thomas Joyner of Red Level, plays for the Covington County 10U Babe Ruth Softball Team.

Stacey said it’s quite wonderful to watch her daughter play.

“It’s an extreme sense of pride, simply put,” Joyner said. “It’s not so much due to the competitive nature, but it’s the discipline and confidence they’ve gained.”

Stacey said it didn’t take much to convince Ashlyn to start playing sports.

“She actually was the first one to approach me,” the mother said. “She’s played ball since she was 4 years old. It was all her idea.”

Like Hagen, Ashlyn’s team won the 10U state softball championship the same week.

Stacey said the experience was “amazing” to watch her daughter win the big trophy.

“The joy that the kids had on their faces — they were so proud of themselves,” she said. “It was amazing to watch.”

Covington County’s 10U Babe Ruth All-Stars will be traveling to Virginia to play in the regional tournament.

Stacey said it will be good to see how the girls compare to other competition.

“When you go to places like that, the kids have a chance to see where the bar is,” she said.

Although Andalusia’s 10U and 8U All-Stars softball teams’ seasons are over, Amanda Furr said watching her daughters, Maggie and Mollie, play on the squads was awesome.

“I love watching them play,” she said. “They both got to be on different All-Star teams this year. Last year, they were on the same 8U team.”

Amanda said she even loves watching them practice despite how long they can be.

“It doesn’t matter when it’s your daughters,” she said. “That’s all we do when softball season starts back in March until we go to late June or early July.”

Maggie and Mollie have played softball since they were 5 years old, their mom said.

During the regular season, Maggie was on the Bulldogs team. Mollie played on the Stingers.

Growing up means changes in the sport.

“With her being so small out there and still pitching, it was very exciting to watch, but also nerve wracking,” she said. “They get to hang out with all of the girls. We’re just a little family, and it’s so much fun.”

Colby Adams and the 16-and-under travel softball team, Alabama Fury, have been a bit busy this summer. Adams, a rising... read more