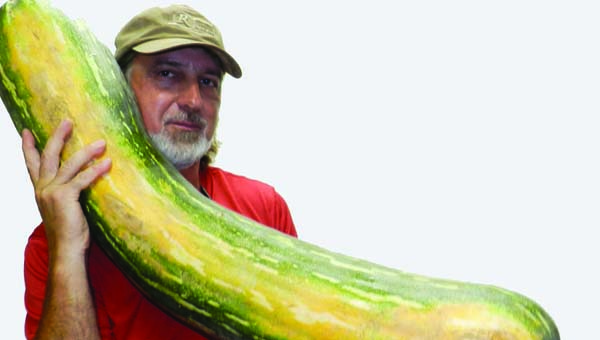 If not, take a closer look at Farmers Market on Saturday

Straight off the vine, that squash weighed an impressive 56 pounds and was 47 inches long, according to Neal Dansby of Andalusia.

“Right now, that thing is weighing in at 46 pounds after being picked about a week ago,” Dansby said.

His father grew the squash from one Dansby received from a farmer in Mississippi.

“That farmer called it a Jupiter squash,” he said. “I bought it for my dad as a gift. He planted the seeds and has harvested more than 400 pounds of squash off of one plant.”

Dansby said a single squash could produce up to 50 seeds.

“Those seeds are located in the stem end in a small area about the size of four lipstick tubs put together,” he said. “All the rest of it is meat that you can eat. The great thing about this kind of squash is that it can sit up all winter, and the longer it sits, the sweeter it gets – unlike regular yellow squash that you have to process as soon as you pick it.”

Dansby, who heads the Andalusia PowerPlant Market Place, has big plans for the fruit.

In case one wonders, a squash – like a tomato – is considered a fruit because it contains seeds.

And it’s those seeds that Dansby hopes to send on overseas mission trips to under-privileged countries.

“First, we’re going to have a little educational fun with it at the Farmer’s Market,” he said. “So, if you want to come see it, come by Saturday between 7 a.m. and noon. Then, after that, we’re going to look at the seeds going to some other places such as Haiti or Ecuador. Imagine what something like that would mean and how much it could feed a family if you have a plant that can produce that much volume.”

With smartphones, tips, evidence go directly to dispatcher at APD Crime fighting? There’s now an app for that – or... read more