Duo finds success out of pool 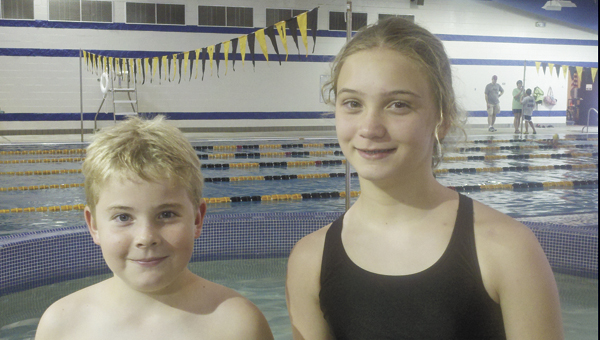 Aidan Vines (left) and Ava Bailey have competed at the state tournament level other than in swimming this summer. | Courtesy photo

Two Andalusia Stingrays got the chance to taste state and regional tournament success in other sports besides swimming this summer.

Ava Bailey, 10, and Aidan Vines, 8, not only performed well at the ARPA State Swim Meet in Cullman last month, but also competed at their respective All-Star softball and baseball state tournaments and beyond.

Vines played for the Andalusia 8U All-Stars, which went on to win the district tournament. The Bulldogs advanced to the state quarterfinals, a feat that the team hasn’t accomplished ever.

In the water, Vines qualified for the state meet in five events, placing in the top 10 in every event.

He is going into the third grade at Andalusia Elementary.

Bailey played on Pleasant Home’s 10U softball team during the regular season this spring, and was selected to play on Covington County’s Babe Ruth All-Stars.

CC beat Opp on June 30 to win the state championship, and then went on to play at the Southeast Regional Tournament on July 18-21, in Glen Allen, Va.

For the Stingrays, Bailey qualified for five events at the state meet, placing in the top 10 in each event.

Bailey will be going into the fifth grade in home school at Outlook Academy.

For more than two months, players from around the area have battled a grueling summer baseball schedule in the lead... read more