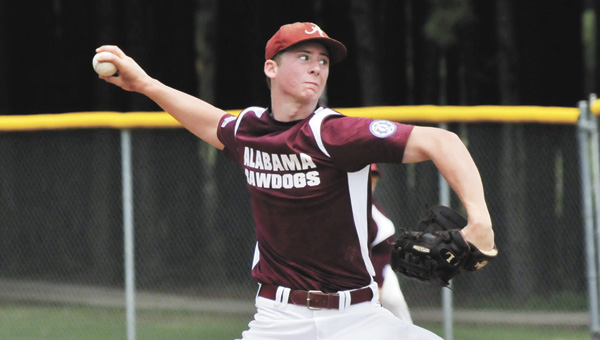 Behind a solid pitching performance from Keegan Curtis, the Rawdogs played hard-nosed ball in a win they battled hard to accomplish.

“It was a team effort,” Rawdogs manager Tony Hendrix said. “I don’t think we played our best game, and I don’t think they did either. We were just fortunate to come out on the right side of it. The kids fought hard.

“It was just a team victory,” he said.

The World Series Most Outstanding Player award winner threw a complete-game two-hitter, had three strikeouts and walked one in the shutout.

Additionally, Curtis scored Alabama’s two runs — one each in the first and sixth — from key hits from Rob Perteet and Jesse McCord.

Curtis said the game plan was to “restore the order.”

“They came and beat us in the first game,” Curtis said. “I know if we came and played Rawdog baseball, then we’d come out on top and be in the dog pile.”

Mid County couldn’t get anything going on the bats, much like it did the entire tournament, coach Jimmy Collins said.

In the top of the first inning, Curtis scored on Perteet’s double that went down the right-field line, landing just fair.

When he saw the ball drop, Curtis starting trucking it around the bases to home.

“In my head I was thinking that we’ve got to get this one run and bust them in the mouth the first,” he said.

With a one-run lead, Curtis got off to a good start on the mound, retiring the first six batters in order.

By the bottom of the third inning, the Rawdogs were playing in stride as Mid County’s Ryan Carline ended up hitting into an inning-ending double play, the first of two in the game.

Texas had its opportunities during the contest, especially in late in the fourth inning with bases loaded and two outs.

However, the hitting struggles ensued and Curtis shut it down for Mid County.

Mid County again couldn’t get anything going in the bottom of the fifth with a three-up, three down inning going into the sixth.

To start the inning, Curtis was hit by a pitch to put a runner on. Perteet then bunted Curtis to second base.

Brian Lane hit a single to left that moved Curtis to third base.

From there, Curtis knew that McCord would get him home for the eventual game-winning run.

Mid County came back after a dismal sixth inning at the plate and held the Rawdogs in the top of the seventh.

Texas got off to a good start in the final inning when Sampere was hit by a pitch with no outs.

Hendrix came out to the mound to check on Curtis, who reassured him that he was fine.

“We really were short on pitching,” Hendrix said. “We were asking (Curtis) to go three or four. He just kept going and going, and he did an outstanding job. He didn’t have his best stuff, but it was good enough to win.”

Curtis then pitched Michael Norris into a 6-4-3 double play, and forced the last batter to fly out to left.

When the last out was recorded, like Curtis said, a dog pile ensued near the pitcher’s mound.

“There’s no better feeling in the world,” Curtis said about the win.

Hendrix said Curtis is what the team defines as a “Rawdog.”

With this victory, Hendrix won his eighth World Series title as a coach.

This win is extra special because his youngest son, Gunner, now has a championship trophy. Hendrix’s oldest son, Brett, won one as a player.

“It’s a big weight off of my shoulders,” the father and coach said.

Gunner said getting the win was “unbelievable.”

“Just being able to play in the game and have an opportunity to go out there and play with great teammates is unbelievable,” he said. “Words can’t describe it.”

Hunter Ellenburg, Justin Ware, Curtis, Perteet, Blane, McCord and Hendrix had one hit each to lead the Rawdogs.

Kanton Richard and Jacob Garza went 1-for-3 each for Mid County.

Aaron Graham gave up two runs on seven hits and struck out four in seven innings for the loss.

Andalusia to use jamboree game as a gauge

Andalusia’s Justin Scherzinger and the rest of the Bulldogs will take on Jackson tonight in a jamboree. |Andrew Garner/Star-News Andalusia... read more