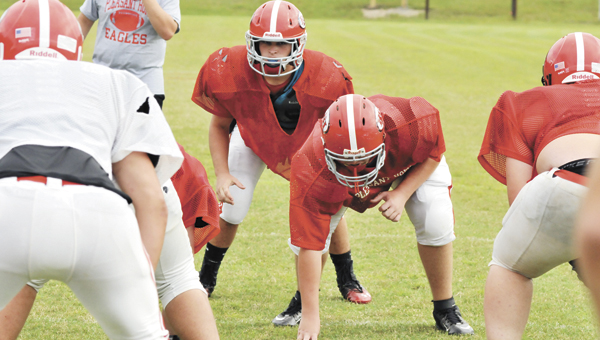 For the past week or so, Pleasant Home has done some much-needed work on itself in order to improve as a team heading into this week’s home game against Georgiana.

The Eagles didn’t play a game last Friday, and instead used it as a day off for the players after a long week of self-evaluation, changes and work on defense, PHS head football coach Cody McCain said.

“We took the bye week that we had and tried to put it to good use,” McCain said. “We spent a lot of time going over film, and had a couple of extra practices earlier that week.”

Toward the end of last week, the Eagles shifted their focus strictly onto Georgiana, who McCain said is much improved.

“In my opinion, Georgiana is a terrible match up (speed wise) for us,” the coach said. “Their quarterback, (Jacquez) Payton, is the fast player in the region. We’ve got a few films on them. He touches the ball every play.

“He made some long runs against good teams like Brantley, Calhoun and McKenzie — and I know they have good speed as well,” he said. “He’s going to be a handful for us to stop. With him playing quarterback, there’s something he can do with the ball every time.”

“Coach Powell is probably the best hire they’ve made there,” McCain said. “They’re playing with a lot more intensity than previous Georgiana teams have played with. Their three losses so far this season were all ranked in the top 10.”

Other than Payton, McCain said he’s got his eye on junior defensive lineman/tight end Jeremy Sims.

Pleasant Home (1-3, 1-2 in Class 1A, Region 2) has size as well on both sides of the line. The Eagles are going to have to slow the game down a bit to have a chance to win this week, McCain said.

“The speed talent is what’s going to be a difficult match up for us,” he said. “We’ve got to try to have long sustained drives, and hopefully slow down the game a bit.”

McCain didn’t talk specifics on what changes the coaches made to the team, but did say that there were some moves on the defensive side of the ball.

“It may not be something people will notice on Friday,” he said. “We moved a couple players on defense, and put two kids on offense who stood out on the junior varsity team. We’re trying to look at them as having a role on the varsity team, not necessarily starting, but as substitutes.”

The one main area of the team that was worked on the most was defense, McCain said.

“It’s been a little bit of a problem spot for us,” he said. “We reviewed film from the previous games, and had one or two kids maybe out of position on a play or not making the reads they need to make.

“We try to continue to explain to the kids that we’re at the half-way point,” he said. “We can’t keep using excuses for experience and having not played more. Hopefully, it’ll be time for them to start performing bit better on Friday night.”

Kick off at Eagles Field is at 7 p.m. Friday.

Before game time, the school will hold a balloon release for Kennedy Cleghorn, a freshman who is battling cancer.

“We’d like to have a good crowd on hand for that,” McCain said.