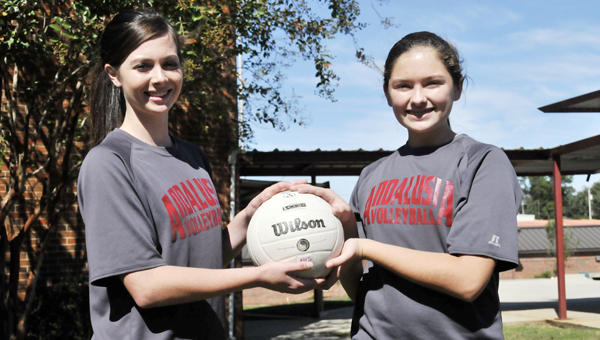 Andalusia freshmen Haley Harper (left) and Rachel Dayton have been playing volleyball since they were in middle school. Both have been setting for AHS. | Andrew Garner/Star-News

The Andalusia freshmen setters have been conquering one of the most important jobs on the Lady Bulldogs’ volleyball team for the past five weeks.

In two weeks, they’re going to put their skill set to good use when the regular season will wrap up as area tournament play starts.

Developing into the players they are today started when they were in middle school as seventh graders.

“It took a while to start setting because I didn’t set until my second year in middle school,” Dayton said. “It was a real big surprise to me because I didn’t think I was any good at it. Then, I started working more with Haley and the other experienced setters.”

Harper’s development as a setter is similar to Dayton’s.

“I set in middle school, but didn’t think I was any good because I was in middle school,” Harper said. “When (Andalusia’s coaches) asked me to set for high school, it was a big surprise to me because I’m not one of the strongest players, as you can tell.”

Spectators can often find Dayton and Harper — when either one are on the court — circling and finding a pass to set for outside or middle hitters during any given match. The job of a setter is to create a pass for hitters to kill or spike over the net.

Dayton and Harper were both pulled up to varsity from the junior varsity ranks before and during the season.

About three weeks into practice, Dayton got the varsity call, while Harper was pulled up four games into the year.

Harper said she was “excited” to have the opportunity to play at the varsity level.

“But then again, I thought I wouldn’t get a lot of playing time because I was a freshman,” Harper said. “With the (mentality) of our team — it took me a little while to get used to it. They’re all older girls and think they should do better. I didn’t know how I’d feel about that. I think we’re getting closer as a team.”

Dayton said she felt pretty comfortable playing on the JV squad, but “then all of a sudden they said, ‘hey, you’re on varsity.'”

AHS volleyball coach Angie Grimes said Dayton and Harper have earned their keep on the team.

One of the most important lessons both learned while playing for AMS is that of “team work.”

“You can’t just have one really good player and nobody else cooperating,” Dayton said. “You’ve got to get a good pass to the setter for the setter to do anything with it.”

Harper said she learned that “attitude is everything.”

“I’m the type of person who feeds off of other people,” she said.

Two weeks from today, Andalusia will play in the Class 4A, Area 2 area tournament at Monroe County. The Lady Bulldogs will enter the tournament as the No. 2 seed.

Dayton and Harper said the key to beat MCHS — who they have lost two times to this season — is being more “aggressive.”

“We have a short team, and their girls are tall,” Harper said.

“Defense, too,” Dayton added. “They really read the court and know where to place it so we’ve got to defend that really well.”

Andalusia’s next match is on Thursday at home in a tri-match against Northview.

The freshmen said they really want to win these last few matches to get a boost going into the area tournament.