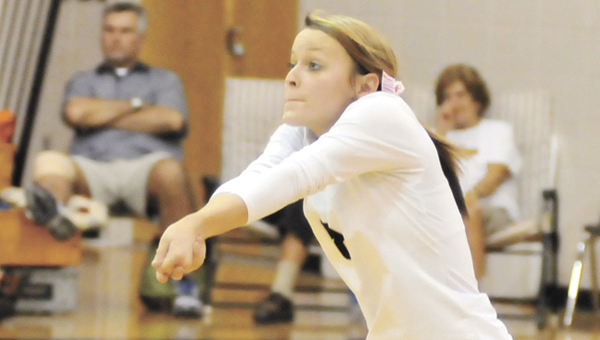 Straughn’s Angel Carter said she believes in hard work and that it will get her what she wants. | Andrew Garner/Star-News

Angel Carter bounces the ball a couple times, throws it in the air and jumps for a serve that clears the net easily.

The Straughn senior libero, who has played on the Lady Tigers’ varsity volleyball squad for the past four years, is usually seen with a big smile on her face.

Carter’s enjoyment of her favorite sport can’t be put into words, she said.

“You just like live it,” Carter said. “It’s just like you wake up in the morning and you think about, oh you get to go practice volleyball today or play a volleyball game today.”

During her eighth-grade year, Carter realized that she liked playing volleyball more than basketball.

When asked what about the sport she likes the most, Carter said it’s receiving the ball.

Spectators can find Carter in the middle of the back row, wearing a white jersey signifying that she’s the libero on the team.

A libero’s job is to normally receive the serve from the opposing team.

Carter said it takes a lot to be a libero, namely not being “scared.”

In college, volleyball players normally utilize what’s called a jump serve, which Carter started using this summer when teammate Courtney Rogers begged her to pick the skill up.

It takes a tremendous amount of focus to get the serve right, she said.

“Sometimes it gets off (line), but most of the time it does pretty good,” Carter said. “It just takes practice.”

After Carter and the rest of the Lady Tigers have a tri-match at Providence Christian today in Dothan, they will visit Pleasant Home on Tuesday for their last match of the regular season before the area tournament.

SHS will have to travel to Opp to play in the Class 3A, Area 2 tournament, which will be held Mon., Oct. 21.

Carter said the season has gone well and that the girls have expectations to do even better in the post season this year. Last season, SHS fell 3-1 to Sipsey Valley in the first round of the South Super Regional in Montgomery.

“We do expect ourselves to work as hard as we can to go as far as we can,” she said. “We don’t expect to, but we strive to win the area tournament and we strive to win at Super Regionals. As a senior, that’s what I want the most.”

Angel is the daughter of Shane and Donna Carter of the Harmony Community.

Giving credit where it’s due

Straughn’s Rollin Kinsaul (5) runs the ball as the offensive line and other players give him some room Friday night.... read more