Playing to play at home 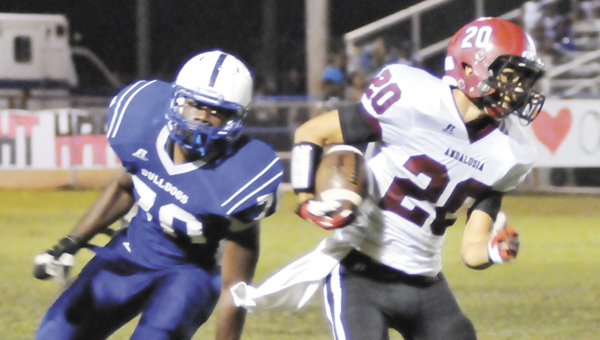 Andalusia’s looking to win a right to host the first round of the playoffs tonight in a home region game against Wilcox Central.

Last week, AHS barely scrapped away a 28-20 victory over Clarke County to clinch a berth in the state playoffs in Grove Hill.

“(WCHS head football) Coach (L.C.) Cole has a college football background at Alabama State,” Seymore said. “I think the kids are starting to buy into what he’s trying to accomplish.”

Seymore said this game is a big one, as far as hosting in the first round is concerned.

“As far as this game to me, it’s got huge implications for us because if you win, you’re guaranteed a home playoff berth in the first round, regardless of what happens next week,” he said.

The coach later said that if AHS wins, it will insure a head-to-head battle with UMS-Wright next week for the Region 1 championship. UMS visits Clarke County tonight.

“They bring a lot of pressure,” he said. “Our goal is to set the tone early on offense. We’ve got to do a better job setting the one early.”

In order to set an early tone, Seymore said establishing a passing game is a must.

Seymore admitted that the team will probably see more spread offenses because they’ve had a successful track record against his defense this season.

Getting off to a slow start has been sort of a norm for Andalusia because the Bulldogs have had to get a feel of their opponent’s defense early in the game.

Seymore said AHS hasn’t faced the same defense on the field than what it’s seen on film.

“The only team that’s been consistent that we’ve seen on film probably has been Straughn,” he said. “They’re a solid defense. We’ve seen pretty much everything you’re going to throw at us.”

That’s a good thing, the coach said, because it’s going to help Andalusia down the road.

“I thin the kids’ focus has been there,” he said. “There are so mnay people who look forward to the game against UMS (next week). Our whole deal this year is to go 1-0 each week — let’s not look ahead, and that’s kind of been our mind set the whole time.

“There’s not been much mention of UMS and the opossibltity of playing for the region championship,” he said. “We know that Wilcox is the next opponent.”

Andalusia will kick off against the Jaguars tonight at 7.

Andalusia’s Colton Elmore (sprained ankle and strained achilles) and Jackie Woods (knee) will be out for tonight’s game.