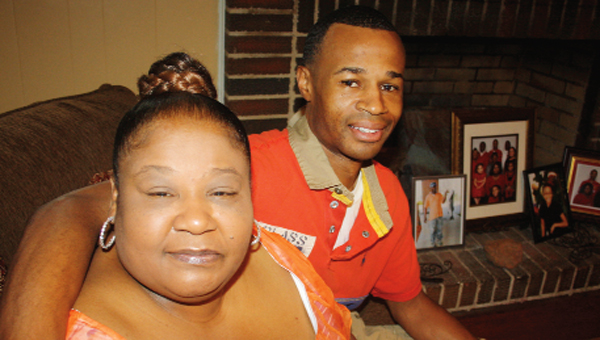 No regrets – that’s what Andalusia’s ArShun Daniels has to say about five tours to Iraq and one to Afghanistan.

Daniels, a field artillery staff sergeant in the U.S. Army stationed in El Paso, Texas, said Friday that for him, joining the military was “absolutely the right decision.”

“There was nothing for me here,” the 1999 Andalusia High School graduate said. “I was working at Shaw, and all my friends were either in jail or away at school. I knew I had to leave, make something of myself.

“I left Shaw that night and the next morning, I was at the recruiter’s office,” he said. “That was 12 years ago.”

He will be 41, with plenty of time for a second career – hopefully in computer programming, Daniels said.

During the years of deployments, Daniels’ mother, Felicia, said she’s constantly kept the faith and kept in touch with her son.

“I don’t do email, texts or anything like that,” she said. “I want to hear his voice on the phone. Sometimes he’d call two or three times a week.

“I can remember one time, he was over there and was complaining about being in such a small room,” she said. “I told him, ‘You be quiet and be thankful you got so many people praying for you. And stay in that small room.’

“It wasn’t a few days later that this woman called and said, ‘You don’t know me, but your son is trying to get in contact with you on the computer,’” she said. “That’s when I found out some of the men he was with were killed.

“We got on the phone and he said he was alright, and it was the best news,” she said. “Before we hung up, his friend said, ‘Ask your mom what we should do next.’”

Daniels doesn’t give many details about his time overseas, other than the highlights – one of which was being interviewed by CNN’s Anderson Cooper.

“It’s kind of surreal,” he said, both about the interview and about finding himself in the middle of a war. “One of the hardest things is that it’s a totally different experience than being at home – the desert, the culture, the language, the food, the religion.”

On Wednesday, Daniels will return to Texas, and hopefully, to a drill sergeant position. His wartime service is done, for now. And for the second time in 10 years, Mrs. Daniels will have all of her children at home for Christmas.

“The thing about going into the Army is that, for me, it was a good thing,” he said. “It gave me a future. It changed me a lot, too. It made me grow, mature. I don’t regret it at all.”

Living History was held Thursday morning on the town square. There truly was a scene of living history on the... read more