Looking for a win 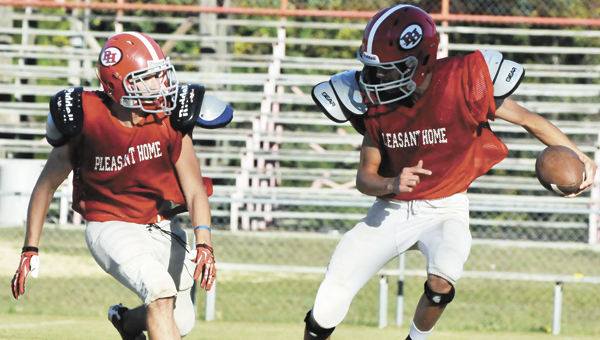 Pleasant Home is aiming to end its season on a positive note as the Eagles start play of their final two games of the season Friday night.

The Eagles have won only one game this season, a 16-12 region victory over Red Level in week two, and will miss going to the playoffs after a three-season postseason stretch.

PHS head football coach Cody McCain said getting a win either this week against McKenzie at home, or on the road next week at J.U. Blacksher, would be great for the players.

“The kids have worked really hard all year,” McCain said. “This is my fourth year being here and as far as their everyday approach to coming to practice and the attitude of the team, this team’s been probably better than any of those other ones, even with the win-loss records.

“It speaks to their character and how much they care,” he said. “Some of the older guys had a lot of frustrations earlier in the season. They realized the situation that we were in and they’ve done a good job — they haven’t complained or backed down. We’ve gotten a ton out of them the past few games. We want to end on a positive note for them, especially with it being senior night for them Friday.”

In the final minutes of practice on Wednesday, the Eagles were running plays they could still use in the final two games of the season, McCain said.

It also helps when the players have had a great attitude at practice, the coach said.

“That’s all we can ask of them to do right now,” McCain said.

Throughout much of the season, Pleasant Home has had to rely on its younger players to step up from junior varsity to fill some varsity roles.

McCain said a lot of the younger players have “responded well.”

“What you find out on the younger players more than anything is that they have to do is adjust to the speed of the game,” he said. “A lot of our freshmen and sophomore type kids have had JV experience, but they would tell you during the game how much different it is — the speed of the game (at the varsity level).

“In JV a lot of times, you don’t see a ton of blitzes,” he said. “The overall speed of the game is the main difference.”

Early in the season, the Eagles went from playing three to four younger guys on both sides of the ball to having five to six now.

For McKenzie, the Tigers have Nicarious Peterson at wide receiver, and Anthony Grace at running back.

Peterson and Grace have been on the radar as far as players to look out for, McCain said.

“Those two guys are really, really quick,” McCain said. “(Grace) has some size, too. He’ll run in between the tackles.

“Last year, Peterson killed us when we played up there,” he said. “He had a reception for a touchdown, a punt and a kick off, so we’ve seen plenty of him.”

“Definitely, we’ve got our hands full this week,” he said.

Austin Chesser, who suffered a stinger early in the second half last week against Brantley, will be ready to play tomorrow night, McCain said.

Kick off in Pleasant Home tomorrow night is at 7.

Andalusia’s Stephanie Watts tries for the ball Tuesday at the Class 4A, Area 2 tournament in Monroeville. | Andrew Garner/Star-News... read more