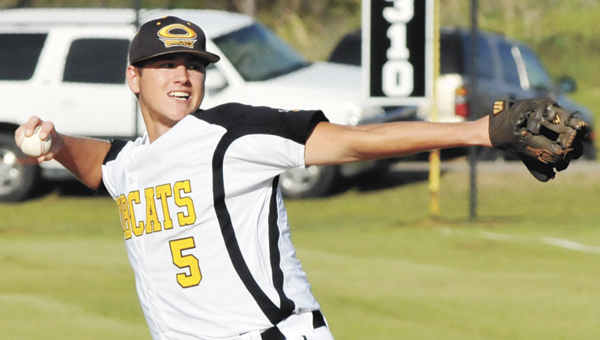 Opp’s pitching, a big run in the seventh and holding on late helped lead the Bobcats to a 4-3 area victory over Straughn on Thursday night.

The Bobcats were led by senior pitcher Ethan Davis, who allowed no runs on three hits and struck out four batters in five innings of work to get the win.

At the plate, Davis had a good outing as he went 2-for-3 with two doubles.

Straughn also had a good game on the mound with its ace Keith Edgar dealing when he had to. Edgar allowed three runs on two hits in six innings.

“Keith Edgar, my hat goes off to him,” OHS coach Michael Cassady said. “I told him how good of a job he did. He gave them a chance to win, and pitched a heck of a game. That’s one where you know you hate it when a kid lost in a seven-inning game because he pitched so well.”

Opp’s big run in the final inning of play came when Davis hit an RBI double to score Eli Johnson with two outs to give the Bobcats a 4-1 lead. Davis was then caught in a run down between second and third to end the inning.

During the play, infield umpire Ken Helms came up hobbling on his right leg and play stopped for a few minutes while he regrouped. Helms finished officiating the rest of the game.

SHS, who always plays a good game against OHS, wasn’t about to give up just yet.

With two outs, Straughn’s Taylor Messick and Edgar hit back-to-back RBI doubles to cut the game by one run.

“I was proud of the way we played being down 4-1 and coming back,” SHS coach John Fussell said. “You’ve got the go-ahead run at the plate and your clean up hitter (on deck).”

The Bobcats had a few good opportunities to score with men on, whether it was with bases loaded or with two runners.

Edgar threw strikes and the Tigers backed him up by making good plays in the field.

“Keith threw a good ball game, but I’m going to be honest with you, he’s thrown well all year,” Fussell said. “Every outing he’s had has been good, but one.

“We played real well against them,” he said. “They’ve got a good ball club, but so do we when we play like that.”

Fussell added that when the boys play up to their potential, they play well.

Walker Messer came in to relieve Davis and struck out two while allowing three hits in two innings for the save.

Davis led off the top of the second with a double, and courtesy runner Cale Pierce later scored on a passed ball for a 1-0 lead.

OHS led 2-0 after an RBI walk from Colt Harrell in the fifth, and couldn’t get any runs across with bases loaded later in the inning.

Straughn got on board in the bottom of the fifth on an Edgar RBI single with two outs.

Luckily for the Bobcats, they scored one run in the sixth when Dakota King scored on a passed ball for a 3-1 advantage.

“We know every time we play here or we play them, they’re going to give us their best,” Cassady said. “They are going to make every play in the field, and they did that today.”

Zane Hollinghead went 2-for-4 for the seventh-ranked Bobcats (16-8), who have to win one of today’s two area games to be able to host the first round of the Class 3A state playoffs.

Messick and Edgar went 2-for-4 each to lead SHS.