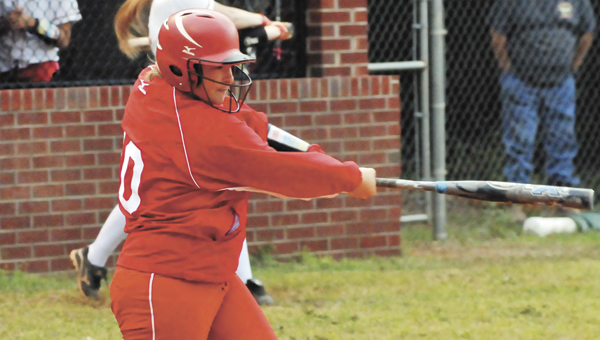 Pleasant Home senior Brianna Dozier hit a two-run, walk-off home run in the bottom of the seventh to help lead the Lady Eagles to a 6-4 area victory over No. 9 Florala Tuesday night.

Dozier’s winning hit came after PHS scored two runs to tie the game at 4-all after executing good base running and needed bunts.

The senior said, from her vantage point, it looked like a good hit.

With this win, the Lady Eagles (10-7, 4-0 in Class 1A, Area 3) clinched the right to host the area tournament later this month.

“Right now, we’re just up and down,” Stephens said. “I don’t think we played our best, but we played to win. That’s where we’re at right now.”

Stephens said that Dozier’s hit was “huge” and came at the right time.

Florala, who played good defense behind pitcher Lily Ritzel, scored two runs in the top of the seventh to take a 4-2 lead.

Tami Hilson hit a high-ball single and later scored on Cassidy Godwin’s single to cut the game at 4-3.

Abby Walker then laid down the bunt of the game, from which she reached on an error that ended up scoring Godwin for the 4-4 tie.

PHS senior Helena Weaver answered the call of her teammates to be a leader by laying down another bunt to advance Walker to second base.

Then, Dozier hit her two-run home run off of a pitch that was straight down the middle.

The hit was a relief for Dozier.

“At first, I was stressed out because we were down,” she said. “When I hit the ball, I felt relieved.”

Ritzel pitched a gem of a game by going a complete seven innings and struck out six in the loss.

Behind Ritzel, the Lady Wildcats stepped up their defense in the infield.

Bailea Rickett got a diving catch in the bottom of the sixth, and the infield six kept the Lady Eagles bats at bay.

Florala led 1-0 after the top of the first on Rickett’s RBI double. The Lady Wildcats then had bases loaded, but couldn’t get any runs across.

PHS tied the game at 1-all when Anna Bulger scored on an error in the bottom of the first.

Later in the top of the fourth, Ritzel added an RBI single with two outs for a 2-1 lead.

The Lady Eagles answered with an RBI double from Dozier to score Helena Weaver for the 2-2 tie.

Florala had a good opportunity to get lower batters out in order during the sixth inning, but that didn’t happen, Lady Wildcats coach Pat Maddox said.

“We had an opportunity to put (away) the tail end of the line up, and we let them get on base twice, which changed the dynamics of the seventh inning,” Maddox said. “That hurt us. I’m proud of my girls. They played very well.”

That they did, as the Lady Wildcats (9-2) played tooth-and-nail with the Lady Eagles during the battle.

McGhee allowed three runs on five hits in six innings to get the win.

The Lady Wildcats visit W.S. Neal on Thursday, while the Lady Eagles travel to Flomaton.