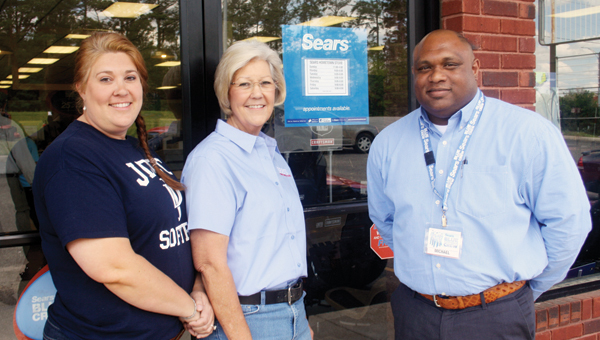 The discolored markings that once spelled the word “Sears” on the awning above the store’s Andalusia location will soon advertise the appliance giant’s logo once again.

But, while the new lettering isn’t quite ready, new owners Willonese and Chris Purvis say the store is, and is already open for business.

“We’ve been open since the beginning of April,” Willonese Purvis said. “We’re working on a new sign and getting things back in place, but we’re ready to serve our new customers.”

Former owner Alan Jones abruptly closed the store’s doors in February, citing differences with corporate management, and for several days, the store’s future seemed to be unclear. Less than a week later, Keri Durkin, vice president of operations for Sears, told The Star-News the store would reopen under new ownership, following a remodel.

Purvis, who also owns a Sears location in Brewton, said expanding into Andalusia was almost a no-brainer.

“We were doing a lot of business with people from Andalusia in our Brewton store after this one closed,” she said. “We just wanted to expand.”

Purvis said she and her husband once owned a “catalogue store” in Brewton, before the company shut down that brand of retail and moved towards a more in-store sales strategy.

“We were at a meeting earlier this year and we noticed a lot of people with name tags with several ribbons hanging from them,” she said. “They were multi-store owners, and on the drive home we decided we wanted to be multi-store owners too.”

Purvis said the hours of operation and merchandise carried at the store will be the same as before the change in ownership. Her biggest concern, she said, is letting customers know the store is back open and able to meet their needs.

“We just want people to know we are here and back open and that we want to win their trust,” she said.

Helping to do that for her new location, Purvis said, will be store manager, and Andalusia resident, Michael Johnson, as well as her daughter, manager Donielle Head, who will be lending her time to both locations.

“Michael does a great job for us,” Purvis said. “We’ll be here for people seven days a week.”

Purvis said a grand-opening event is in the works for the new store, and will be announced in the coming weeks.

Sears is located on the West Bypass, adjacent to Strikers bowling alley.